As President Trump and his administration mull their next moves on Iran, a new poll found that less than a quarter of registered U.S. voters say they want the U.S. to take military action against Tehran.

A Hill-HarrisX survey taken June 22-23 found that 19 percent of voters wanted the U.S. to launch a limited military strike on Iran, the option that Trump had ordered but pulled back from at the last minute last Thursday. Five percent of respondents said the U.S. should declare war on Iran. 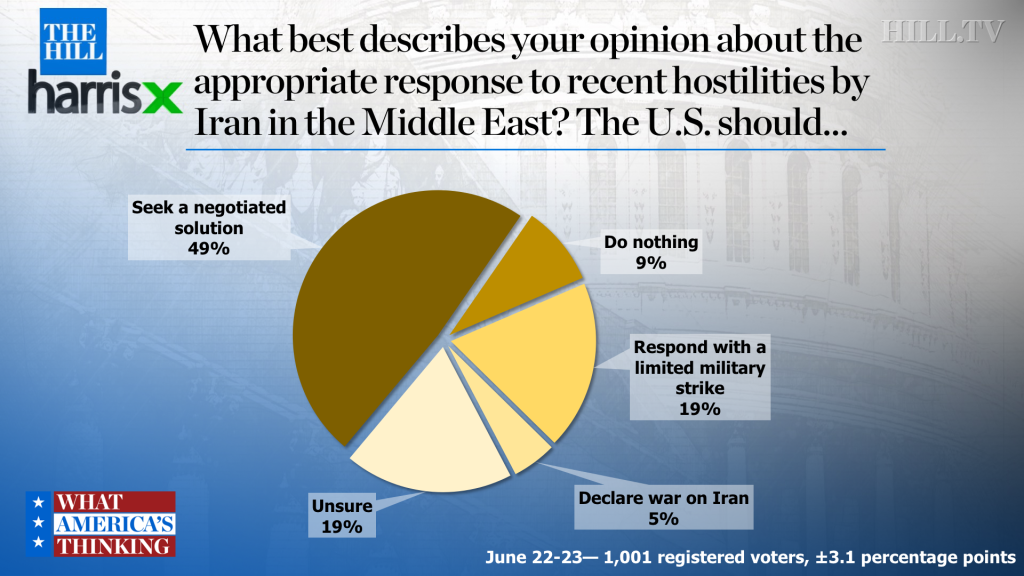 The majority of voters, 58 percent, preferred a non-military response to Iran’s shooting down of a U.S. spy drone. Forty-nine percent of voters said they wanted a negotiated end to the recent hostilities while 9 percent said that Trump should make no action.

A large number of participants, 19 percent, said they were unsure what they wanted the U.S. to do next.

National security adviser John Bolton and Secretary of State Mike Pompeo have reportedly been urging Trump to take military action against Iran’s Shia cleric-led government. Bolton has publicly advocated for a violent overthrow of Iran’s leadership for over a decade.

Fox News host Tucker Carlson has been one of the most prominent Trump allies urging the president to refrain from going to war, warning that it would cost him re-election in 2020.

In the survey, Republican voters were only slightly more interested in a military response to Iran than the general public. Thirty-one percent of GOP participants said they wanted either limited airstrikes or a declaration of war.

Fifty percent of Republicans in the poll said they wanted a peaceful response.

Twenty-seven percent of independent voters said they wanted Trump to use the military to respond to the drone shooting while 16 percent of Democrats agreed.

Sixty-seven percent of Democrats said they wanted negotiations or no response while 54 percent of independents said the same.

The poll also found that older participants, those 65 and above, were the age group most averse to going to war with Iran. Sixty percent said they wanted the U.S. to seek a negotiated end to hostilities while another 4 percent wanted no American response.

While other age groups were somewhat more amenable to military action, a majority of all of them said they preferred avoiding war.

The Hill-HarrisX survey was conducted among a statistically representative panel of 1,001 registered voters. It has a sampling margin of error of 3.1 percentage points and a 95 percent confidence level.