Forty-five percent of registered voters approve of how President Trump is performing his official duties, while 55 percent do not, according to a new Hill-HarrisX poll.

The latest survey found divergent views on Trump among men and women, with a majority of male respondents, 52 percent, approving of the president but only 38 percent of women agreeing.

The opinions of both sexes have shifted slightly from the June 7-8 Hill-HarrisX survey, which found that 42 percent of female participants backed Trump while 48 percent of men did. 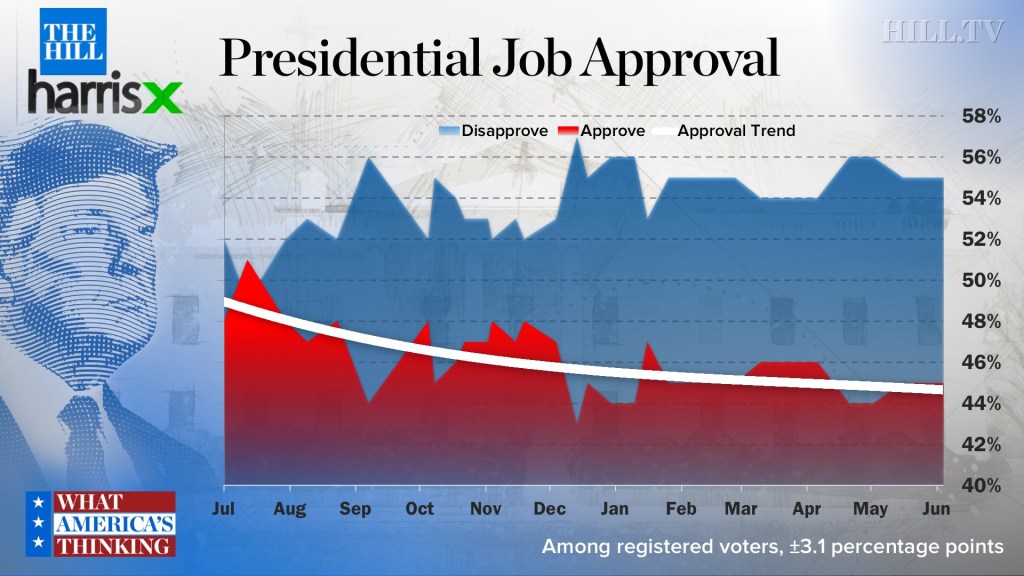 Younger voters were less supportive of Trump, with only 35 percent of participants between 18 and 34 in the latest poll saying they approved of him. There was no split between male and female opinion in this age group, either.

Meanwhile, 46 percent of respondents between the ages of 35 and 49 said they approved of Trump, as did 47 percent of those between 50 and 64. Voters who were 65 and older were evenly split in their opinions about the president.

Trump’s job rating has generally hovered between 44 and 46 percent since late January in Hill-HarrisX polling. The president’s supporters remain more evenly split on whether they “strongly” or “somewhat” approve of him, while critics were more likely to say they “strongly” disapprove of him.

The survey was conducted June 25-26 among a statistically representative online panel of 1,000 registered voters with a 95 percent confidence level and a 3.1 percent sampling margin of error.