More Americans say they favor criminal prosecutions for people who illegally cross the border than punishing them with civil fines, according to a new Hill-HarrisX poll.

The survey, released Monday, found that a plurality of voters, 41 percent, thought those crossing the border illegally should face criminal punishment, while 32 percent said it should just warrant a fine.

Voters were split on the issue along party lines, with a strong majority of Republicans — 67 percent — favoring criminal prosecution for illegal crossings. Just 24 percent of Democrats said the same. 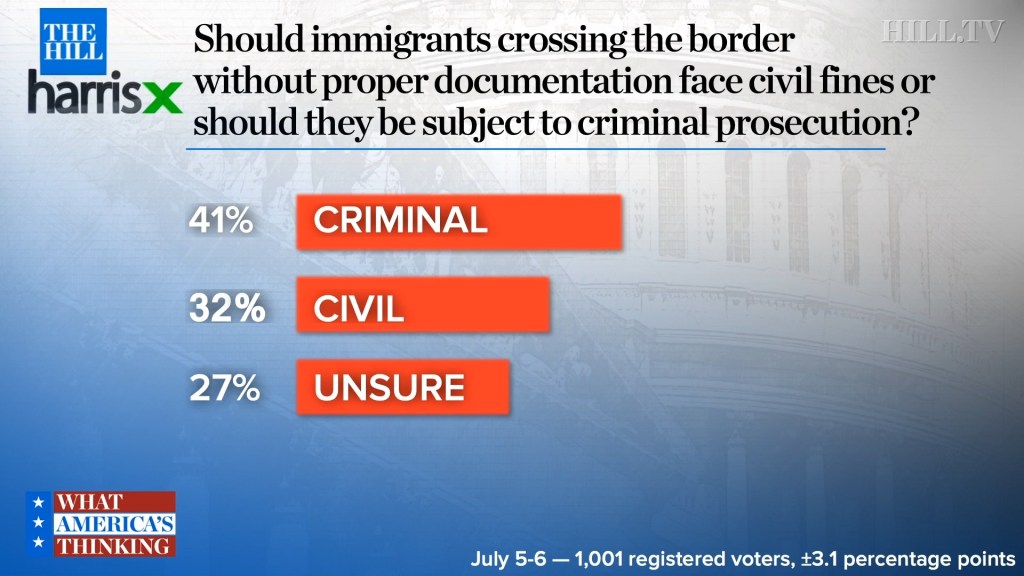 The results were based on interviews with 1,001 registered voters conducted between July 5 and 6. There is a margin of effort or plus of 3.1 percentage points.

The question of whether those crossing the border illegally should be punished as criminals has come up in the presidential race.

In the second night of the Democratic debate, nine of the 10 Democrats on stage raised their hands to indicate they did not think those crossing the border illegally should face a criminal punishment.

In an interview with Hill.TV, Delaney said that he doesn’t think it’s the best approach amid an influx of migrants at the U.S.-Mexico border and instead called on Congress to deal with the aftermath of President Trump’s zero tolerance immigration policy that separated hundreds of migrant families.

“I just don’t think at this moment in time when we have a huge kind of surge at our border sending a message that we’re going to decriminalize crossings is the right thing to do,” he told Hill.TV. “Let’s pass a law saying children cannot be separated from their parents, which is the law I’m in favor of.”

The treatment of people detained at the border for crossing illegally to obtain asylum in the United States has also become a major political issue. An internal government report released last week described squalid and over-crowded conditions at facilities holding people who crossed the border.

24 hours ago
Rising
2 days ago