A overwhelming majority of Americans said in a poll released on Friday that the U.S. women’s national soccer team should receive about the same pay as the men’s team.

Equal pay for the national women’s team, which won the World Cup earlier this year, was strongly supported across party lines.

Seventy percent of Republicans said they support paying the U.S. women’s soccer team equally, as do 74 percent of Democrats and 75 percent of independents. 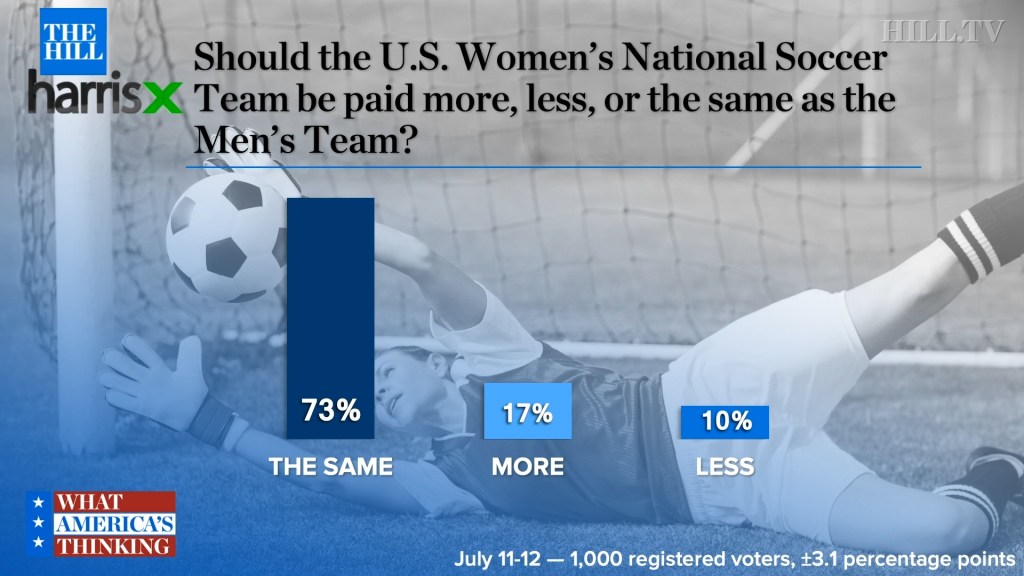 A strong 78 percent of female respondents said that women’s soccer team should be paid the same, compared to 67 percent of men.

Twenty-seven percent of those 18 to 49 said female players should be paid more.

While 87 percent of those 65 and older said women should get equal pay, only 5 percent backed paying them more than men.

The results were based on interviews with 1,000 registered voters from July 11-12. The sampling margin of error is plus or minus 3.1 percentage points.

The poll comes amid renewed scrutiny over the pay gap following the team’s record fourth World Cup title. After their 2-0 win against the Netherlands, fans at the stadium in Stade de Lyon, France started chanting “equal pay.”

All 28 members of the U.S. women’s team have filed a gender discrimination lawsuit against the United States Soccer Federation, alleging that the organization unfairly pays male players far more than female ones.

According to the lawsuit filed, female athletes are, in some cases, earning just 38 percent of pay per game.

The federation has pushed back against claims over pay inequities, saying in a May court filing that the pay gap is “based on differences in aggregate revenue generated by the different teams and/or any other factor other than sex,” The Washington Post noted.

But multiple reports have shown that women’s games have not only generated more viewership, but also more revenue than the men’s.

According to a Wall Street Journal report in June, the U.S. women’s games earned more revenue than U.S. men’s games in all three years after the women won the 2015 World Cup.

The men’s team, meanwhile, failed to qualify for the 2018 World Cup, missing the tournament for the first time in more than 30 years.

In response to the disparity, co-chairs of the Democratic Women’s Caucus sent a letter to Soccer Federation President Carlos Cordeiro calling for him to address inequities in pay, publicity, and investment.

“The inequities that these women champions have faced as members of the USWNT are indefensible,” the members wrote in a letter earlier this month. “The U.S. Soccer Federation should work to correct course and close the wage gap so that the only thing women athletes are fighting for is the world title or a gold medal. Instead, the message sent to women and girls is that their skills and accomplishments are of lesser value.”