Former Vice President Joe Biden’s support in the latest Hill-HarrisX poll of Democratic voters has fallen below 30 percent, his lowest mark in the survey so far.

The poll, released on Monday, found that 29 percent of likely Democratic primary voters support Biden as their first choice for president, while 16 percent back Sen. Bernie Sanders (I-Vt.).

This marks a 4-point drop for Biden from an identical poll conducted two weeks ago and immediately following the first 2020 Democratic debates. It also represents a 17-point drop from when same poll was first conducted in May, a month after Biden formally launched his campaign bid. 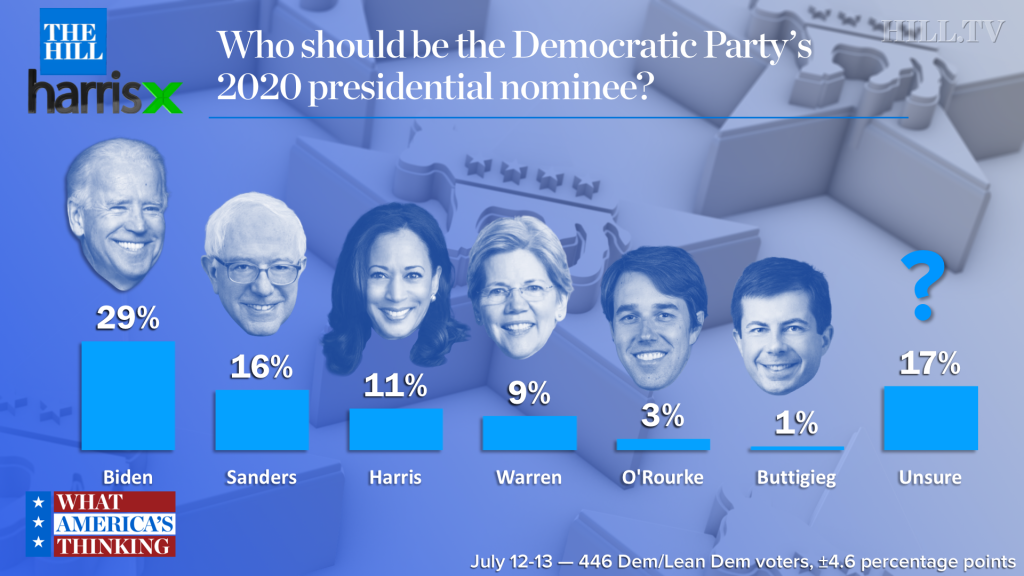 Sen. Kamala Harris (D-Calif.) and Sen. Elizabeth Warren (D-Mass.) retained their spots, with Harris getting 11 percent and Warren trailing close behind at 9 percent.

Former Texas Congressman Beto O’Rourke, who has been lagging in national polls over the last few months, notched up 2 points to 3 percent.

A large number of respondents, 17 percent, were undecided.

The poll can be viewed as another setback for Biden, whose campaign has been grappling with attacks on his civil rights record in recent weeks.

Harris and Biden went head-to-head last month on the second night of the first Democratic presidential debates, where she confronted him on his past comments about working with segregationists senators and his past opposition to school busing.

The California senator saw a bump in a number of polls — including the Hill’s own Hill-HarrisX survey — following the confrontation.

The Hill-HarrisX poll surveyed 1,003 voters between July 12 and July 13. The sampling margin of error of plus or minus 3.1 percentage points.