Nearly half of voters say criticizing America is unpatriotic, according to a new Hill-HarrisX poll released on Monday.

The survey found that 47 percent of Americans believe that speaking out against the U.S. is unpatriotic, while 29 percent said that such criticism is a way of showing patriotism. About a quarter — 24 percent — said they weren’t sure. 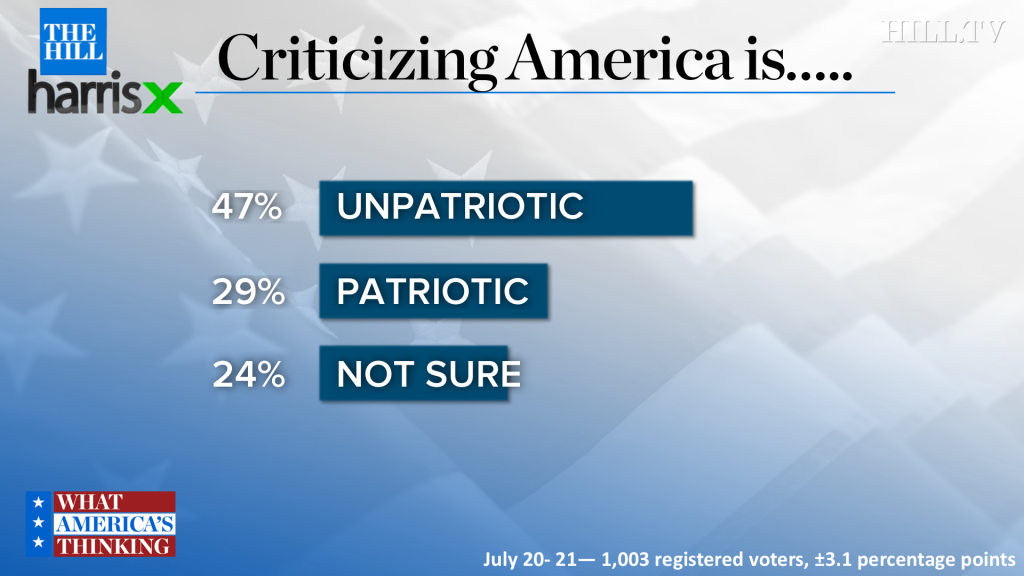 More than half of Republican and Republican-leaning voters — 64 percent — said criticizing America is unpatriotic, compared to 40 percent each for Democrats and Independents.

Younger respondents were more likely to say that U.S. criticism is instead a patriotic act.

Thirty-seven percent of those 18 to 34 see criticism of America as a form of patriotism.

The Hill-HarrisX survey was conducted online from July 20-21 among 1,003 registered voters. It has a margin of error of plus or minus 3.1 percentage points.

The poll comes amid President Trump’s ongoing feud with four freshmen Democratic lawmakers, commonly referred to as “the Squad,” whom he has accused of hating America.

Trump on Monday renewed his attacks on the progressive women of color, calling them a “very Racist group of troublemakers.”

In their pushback against the president, the Squad has pointed out that his 2016 campaign was rife with criticism of American government and society.

Trump faced backlash last week after he tweeted that the four lawmakers should go back to their home countries, even though they are all U.S. citizens and all but one was born in the U.S. He also came under fire when a crowd at one of his rallies chanted “send her back” in reference to Omar, a former Somali refugee.

The president initially sought to distance himself from the chants, but he later praised the supporters.

Though Trump has been called a racist by those on both sides of the aisle, he doesn’t appear to be backing down anytime soon. He claimed over the weekend that the four lawmakers should apologize — not him.

“I don’t believe the four Congresswomen are capable of loving our Country. They should apologize to America (and Israel) for the horrible (hateful) things they have said. They are destroying the Democrat Party, but are weak & insecure people who can never destroy our great Nation!” he tweeted.