A majority of Americans oppose paying reparations to descendants of slaves, according to a Hill-HarrisX poll.

The idea was a divisive issue among voters along party lines.

Eighty-one percent of Republicans opposed reparations, compared to 36 percent of Democrats. More than half of Independents — 57 percent — meanwhile said the same. 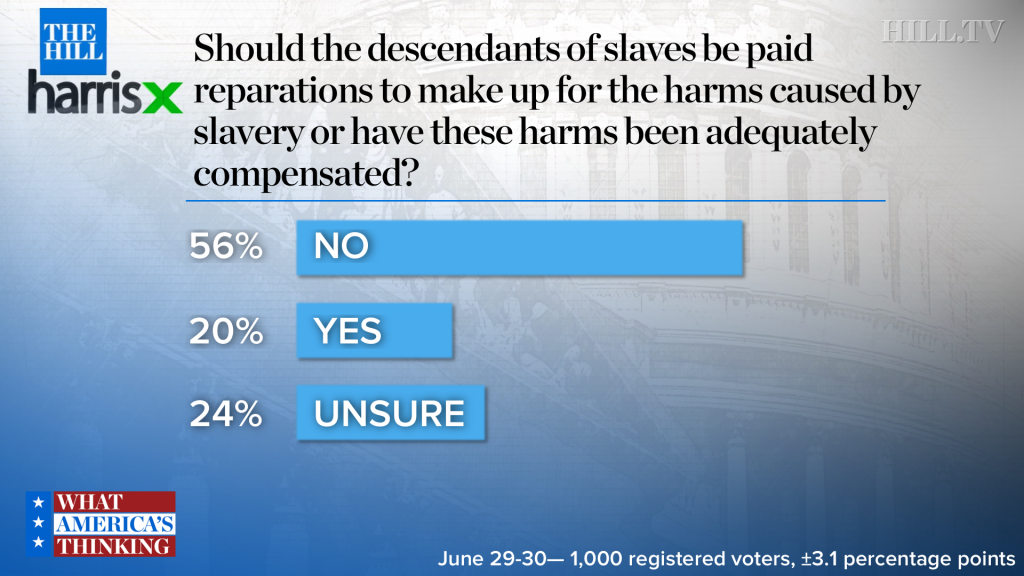 When broken by race, the poll showed that 55 percent of black voters support some form of compensatory payment, compared to only 11 percent of white voters.

The poll also found that the older voters were, the less inclined they are to support the notion.

Sixty-nine percent of Americans 65 and older said that there were not in favor of reparations.

Reparations has become a topic of debate in the Democratic presidential primary.

A number of 2020 candidates, including former Texas Congressman Beto O’Rourke and former Housing and Urban Development Secretary Julián Castro, have voiced some level of support for reparations, saying the issue should be further reviewed.

However, neither bill takes a position on paying reparations to descendants of slaves.

The Hill-HarrisX poll was conducted online among 1,000 registered voters from June 29-30. The sampling margin of error of this poll was plus or minus 3.1 percentage points.