The survey showed that 34 percent of likely Democratic primary voters back Biden, marking a 14-point lead over Sanders.

It also found rising support for Sanders and Sen. Elizabeth Warren (D-Mass.), the only other two candidates in double figures in the poll.

Sanders jumped by 4 percent to 20 percent and Warren by 3 percent to 12 percent.

Sen. Kamala Harris (D-Calif.) is in fourth place with 9 percent support, but her numbers have dropped by 2 percent since the last poll conducted two weeks ago. South Bend, Ind., Mayor Pete Buttigieg rounded out the top five with 5 percent, a 4 percent jump over two weeks. 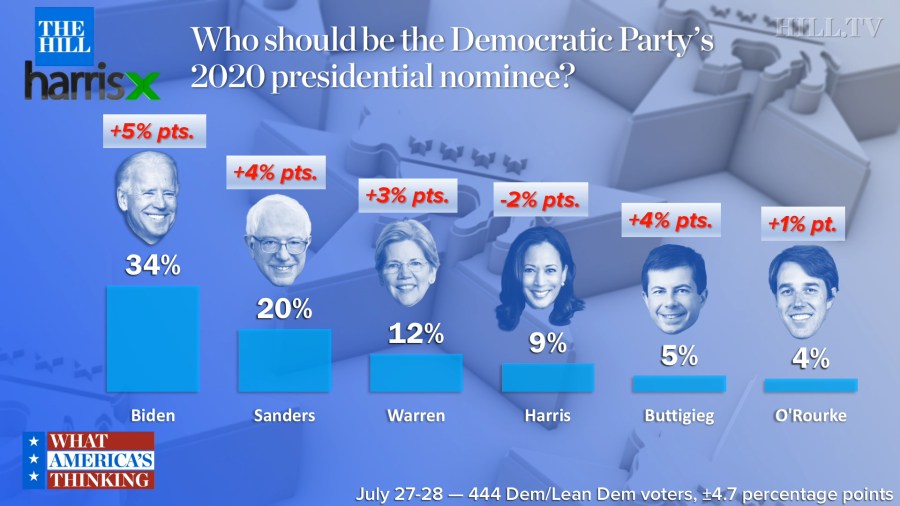 The new poll also suggests that a growing number of Democratic voters are starting to make up their minds about which candidate to back.

The survey showed that the number of undecided voters dropped to 8 percent from 17 percent.

The latest poll can be viewed as welcome news for Sanders, Biden and Warren going into the second round of primary debates. Earlier this month, Biden’s support slipped below 30 percent, his lowest mark in the Hill-HarrisX survey to date.

The Democrats are poised to face-off again in two debates this week in Detroit.

Warren and Sanders are set to headline the first of debates on Tuesday, while Biden will take center stage along with Harris the following night.

This marks the first time Warren and Sanders will have shared the debate stage. Both liberal heavyweights have largely avoided criticizing each other but could look to set themselves apart as the top progressive candidate.

The lineup also marks a potential rematch for Biden and Harris, who clashed during the last debate over civil rights issues.

Leading up to the debate, Harris unveiled her health care plan, which seeks to expand coverage without getting rid of private insurance.

The plan has already drawn fire from both Sanders and Biden alike.

While Biden accused Harris of backtracking on her pledge to support “Medicare fo All,” Sanders slammed the plan for what he characterized as relying too heavily on private insurance.

The Hill-HarrisX survey was conducted online among 1,000 registered voters. The sampling margin of error is plus or minus 3.1 percentage points.