Almost half of independent voters said in a new poll the the Democratic Party is leaning too far to the left.

The Hill-HarrisX poll showed that 48 percent of independent voters believe the Democratic Party is swinging too far to the left, compared to 68 percent of Republicans and 20 percent of Democrats.

Only a third of independents — 33 percent — thought the Republican Party was leaning too far to the right.

Overall, most Democrats and Republicans believe their party strikes the right balance. 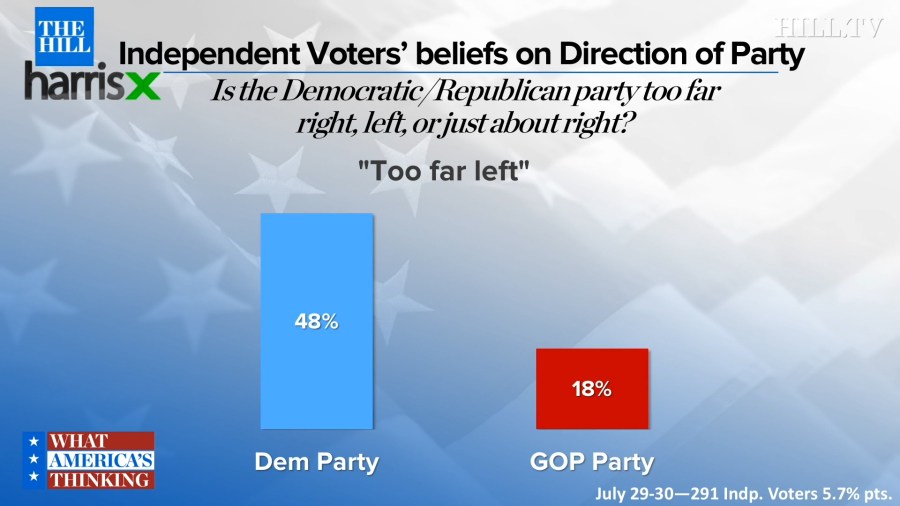 An equal number — 67 percent — of Democratic and Republican voters said their party is “just about right.”

HarrisX researchers surveyed 1,002 registered voters between July 29 and July 30. The sampling margin of error of this poll is plus or minus 3.1 percentage points.

The latest Hill-HarrisX survey comes amid the second round of Democratic primary debates this week in Detroit, Mich.

Progressives and centrists clashed during a lively debate Tuesday, putting Democratic divides on full display over key issues like immigration and health care.

Liberal heavyweight Sen. Elizabeth Warren (D-Mass.) boasted one of the biggest breakout moments of the night after she took a dig at former Former Rep. John Delaney (D-Md.) for his repeated criticism of more progressive policies like Medicare for All, which he deemed “fairy tale economics.”

“I don’t understand why anybody goes to all the trouble of running for president of the United States just to talk about what we really can’t do and shouldn’t fight for,” Warren said, sparking a round of applause from the debate crowd.

Delaney fired back at Warren a day after the debate, accusing the top-tier candidate of not wanting to “defend her policies.”

Medicare for All will likely be a hot topic of debate once again in Wednesday night’s debate, which includes headliners like former Vice President Joe Biden and Kamala Harris (D-Calif.). Both contenders have recently released their health care plans in the lead up to the second round of debates.

The back-and-forth between Warren and Delaney marked just one of many heated exchanges between the two wings of the party over issues that could potentially sway Republicans and independents to move away from Trump next year.

Both parties recognize that independents are key to winning elections. According to a recent Pew Research Center report, nearly four-in-ten voters identify as politically independent, though most lean toward one of the two major parties.