Support for impeachment proceedings against President Trump has slipped among Democratic voters following special counsel Robert Mueller’s public testimony before Congress last week, according to a poll released on Thursday.

The Hill-HarrisX survey found 67 percent of Democratic voters support impeachment proceedings against Trump, marking a four-point drop from an identical poll that was conducted in May.

The margin of error for Democratic voters is 5.1 percentage points. 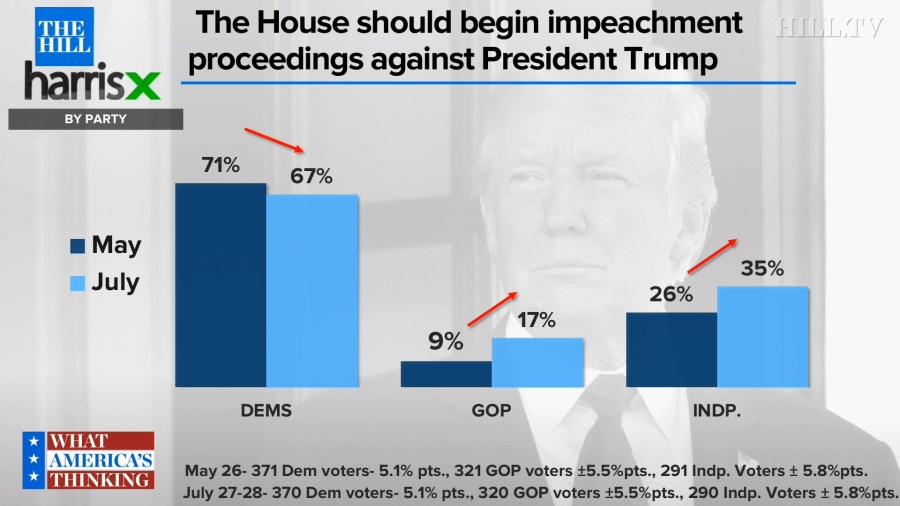 The number of Republicans and independents who support impeachment, meanwhile, is up since Mueller’s July 24 testimony.

Seventeen percent of GOP voters say they would support an impeachment inquiry, an increase of 8 percent. More than a third — 35 percent of independent voters said the same, which represents a 9-point bump.

Overall, voters in the latest poll were split evenly on the issue at 41 percent, while 18 percent remain unsure.

The poll comes just a week after Mueller’s marathon testimony before two congressional House committees, where the special counsel largely stuck to the contents of his 400-plus page report on Russian interference in the 2016 election.

The special counsel said in his report that he didn’t find sufficient evidence of collusion between Russia and the Trump campaign. He also didn’t conclusively determine whether the president committed obstruction of justice, even though he outlined nearly a dozen instances involving Trump.

Trump and his allies celebrated the testimony as a victory and declared that the “phony cloud” cast by the investigation had been lifted.

But a number of House Democrats have come out in favor of opening an impeachment inquiry into Trump since last week, citing Mueller’s testimony.

Democratic leadership has long called for restraint on impeachment. A day after Mueller’s testimony, Speaker Nancy Pelosi (D-Calif.) said she would only move forward on impeachment efforts if the caucus had a strong hand.

“My position has always been [that] whatever decision we make in that regard would have to be done with our strongest possible hand, and we still have some outstanding matters in the courts,” Pelosi said during a news conference.

HarrisX conducted the survey of 1,000 registered voters between July 27 and July 28. The margin of error for the sample is plus or minus 3.1 percentage points.