Mental illness, weak gun laws and hateful public rhetoric are largely to blame for mass shootings in the United States, according to a new Hill-HarrisX poll. 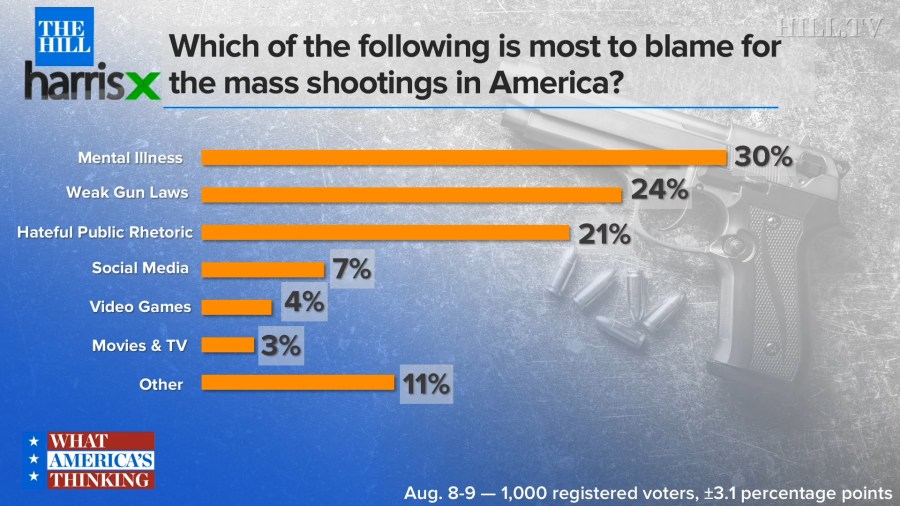 Social media placed fourth, at 7 percent, on the list of choices, followed by video games, at 4 percent. Three percent of voters said movies and TV were to blame for the the prevalence of mass shootings.

Another 11 percent of poll participants picked “other.”

The survey found that GOP and independent voters were more inclined to say mental illness was a determining factor, with 39 percent in each group picking it as the top reason for shootings.

The massacres have prompted renewed scrutiny of gun control laws and Trump rhetoric’s toward immigrants.

The El Paso gunman allegedly published an anti-immigrant manifesto warning of a “Hispanic invasion” shortly before an attack at a Walmart near the U.S. southern border claimed the lives of 22 people.

Democratic lawmakers and former white supremacists have noted that Trump has used similar language when talking about immigrants.

Trump has defended his immigration rhetoric, arguing that it did not inspire the El Paso shooting.

In a White House speech last week addressing the shootings, the president advocated for a crackdown on violent video games and called for mental health reform.

“Mental illness and hatred pulls the trigger, not the gun,” he said.

Trump later called for “intelligent background checks” on gun purchases. The president said Senate Majority Leader Mitch McConnell (R-Ky.) is on board with the idea, though the GOP lawmaker hasn’t publicly backed any gun bills following the mass shootings.

Democrats, meanwhile, say that both Trump’s rhetoric towards immigrants and America’s gun laws play a significant role in gun-related violence.

Former Vice President Joe Biden penned an opinion piece over the weekend calling for the reinstatement of the assault weapons ban.

“The 1994 assault weapons and high-capacity magazines bans worked. And if I am elected president, we’re going to pass them again — and this time, we’ll make them even stronger,” Biden wrote in The New York Times.

The Hill-HarrisX survey was conducted online among 1,000 registered voters from Aug. 8-9 with a margin of error of plus or minus 3.1 percentage points.

6 days ago
The Debrief
1 week ago