Top-tier candidates, including former Vice President Joe Biden and Sen. Bernie Sanders, saw a dip in support over the past two weeks while several lower-tier candidates saw a slight uptick in their numbers, according to the latest Hill-HarrisX poll released on Wednesday.

The survey showed that 31 percent of likely Democratic primary voters back Biden, marking a 3 point drop from an identical poll conducted two weeks ago. 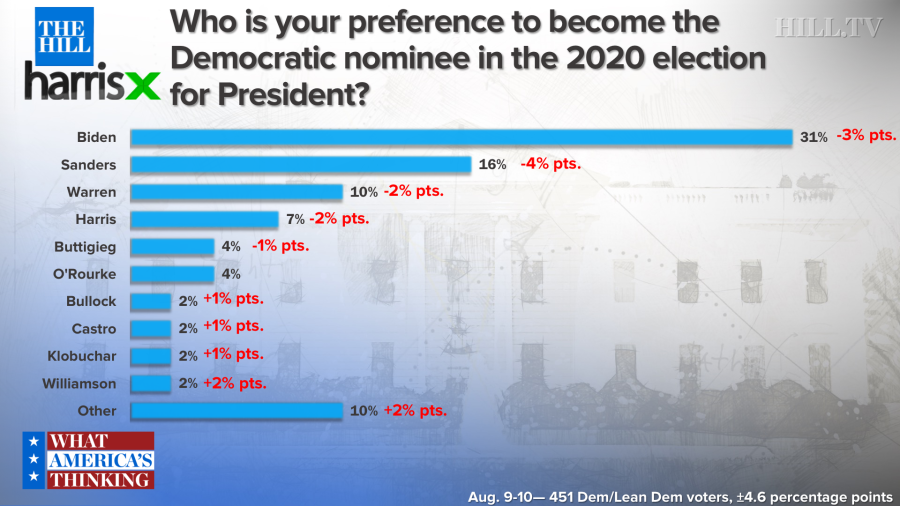 It also found a drop in support for Sanders and Sen. Elizabeth Warren (D-Mass.), the only other two candidates in double figures in the poll.

Sen. Kamala Harris (D-Calif.) retained her spot in fourth place but her 7 percent support is a decrease of 2 points since the July 29 poll. South Bend, Ind., Mayor Pete Buttigieg rounded out the top five with 4 percent, a 1 point dip over the past two weeks.

Former Texas congressman Beto O’Rourke, meanwhile, held onto to sixth place with 4 percent support, which is unchanged from two weeks ago.

The number of undecided voters ticked back up to 10 percent, after briefly dropping to 8 percent.

A handful of lower-tier candidates received a slight boost.

Gov. Steve Bullock (D-Mont.), former San Antonio Mayor Julián Castro (D), and Sen. Amy Klobuchar (D-Minn.) all ticked up one point to two percent. Best-selling author Marianne Williamson, who had a breakout moment during the second round of Democratic debates, saw a two-point jump to 2 percent.

The latest poll comes as a number of 2020 White House contenders make the rounds in Iowa to make their case to caucus goers.

Though the Iowa caucuses are still six months away, virtually every candidate has made an appearance at the Iowa State Fair, which is considered an essential campaign stop for presidential hopefuls on both sides of the aisle.

Many of the candidates are also scrambling to qualify for the next round of Democratic primary debates in September.

The Hill-HarrisX poll was conducted among 451 Democratic and Democratic-leaning independent voters with a margin of error of plus or minus 4.6 percentage points.