Poll: Biden supporters warm to Warren as an alternative

A new poll shows that former Vice President Joe Biden’s supporters are starting to warm up to Sen. Elizabeth Warren (D-Mass.) as a viable alternative, though Sen. Bernie Sanders (I-Vt.) is still the preferred second choice.

The Hill-HarrisX poll released on Monday found that 20 percent of likely Democratic voters who support Biden would support Warren as their second choice, which marks a 12-point increase from when an identical poll was conducted in May. 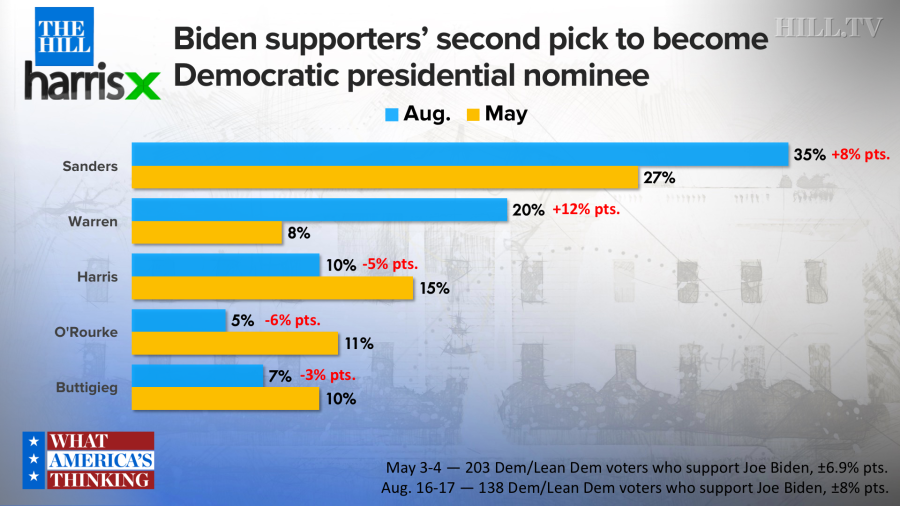 However, Sanders still remains the top second-choice candidate among Biden supporters at 35 percent, an 8-point increase from the May 3-4 poll.

Other polls have shown similar results.

According to a weekly Morning Consult data tracker, 25 percent of Biden’s supporters said they backed Sanders as their second choice, compared to 20 percent who chose Warren as their next favorite. Harris was named as the second option by 14 percent, according to the poll’s latest figures that were updated last week.

The survey comes as the Democratic primary heats up, though signs are emerging that the race is becoming a four-way race between Biden, Sanders, Warren and Harris.

The Hill-HarrisX survey was conducted among 138 Democratic and Democratic-leaning Biden supporters between Aug. 16 and 17 with a margin of error of plus or minus 8 percentage points.

6 days ago
The Debrief
1 week ago