The survey released on Tuesday still shows Warren in third place, but she has ticked up four points over the past two weeks to 14 percent support among likely Democratic and independent voters. 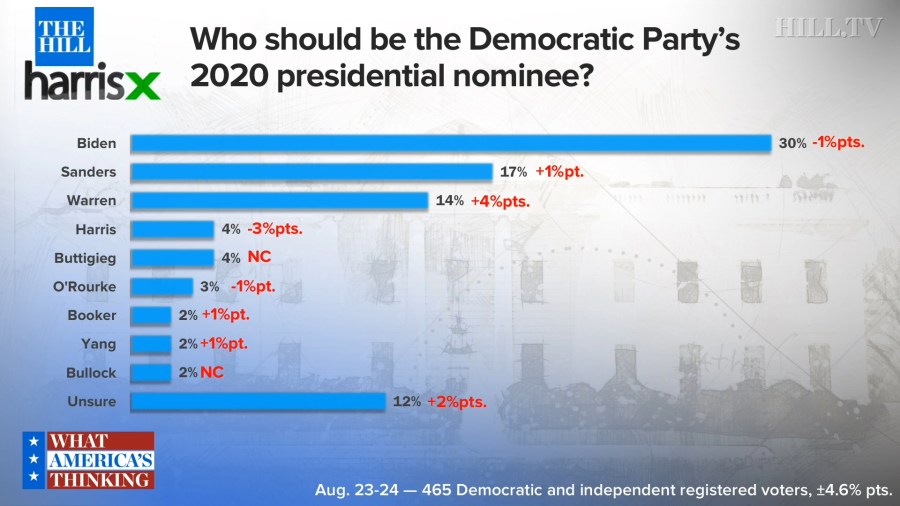 Biden, meanwhile, held onto the top spot with 30 percent, but is down 1 percentage point. Sanders placed second at 17 percent and is up 1 point from the Aug. 9-10 poll.

Former Rep. Beto O’Rourke (D-Texas) rounded out the top five at 3 percent, a 1 point decrease compared to the previous poll.

Sen. Cory Booker (N.J.), tech entrepreneur Andrew Yang and Montana Gov. Steve Bullock (D) were the only other candidates that polled above 1 percent in the poll.

The latest results come amid signs that Sanders and Warren are cutting into Biden’s lead over the Democratic contenders for the White House, though the former vice president remains the front-runner.

The Hill-HarrisX poll surveyed 465 Democratic and independent registered voters between Aug. 23 and Aug. 24 with a margin of error of plus or minus 4.6 percentage points.

3 hours ago
Rising
3 days ago