An overwhelming majority of GOP voters want Vice President Mike Pence to stay on as President Trump’s running mate in the 2020 election, according to a new nationwide survey released on Friday.

The Hill-HarrisX poll found that 69 percent of registered Republican voters want Pence to share a ticket with Trump in next year’s election. 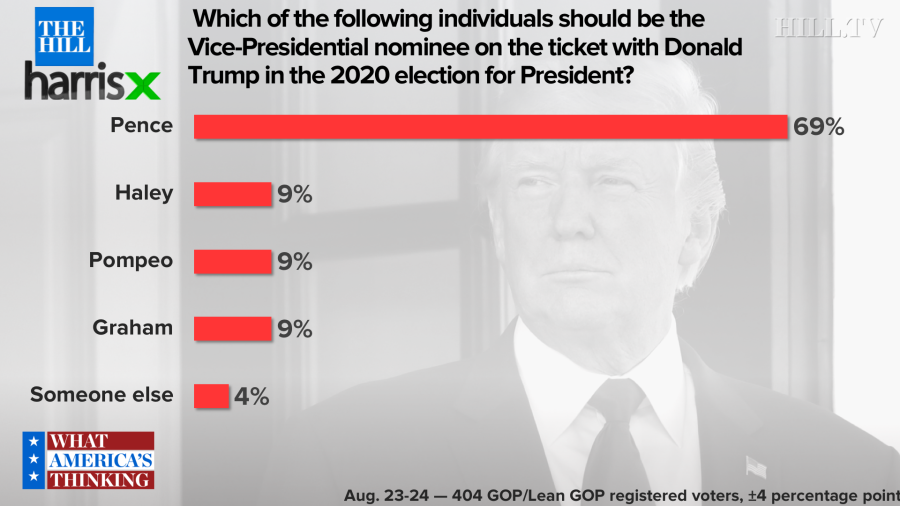 Another 4 percent of Republicans voters said they preferred someone else, without specifying a name.

When broken down by gender, 73 percent of men named Pence as their top choice, compared to 63 percent of Republican women.

Haley made headlines last week with a tweet that offered support for Pence and stated “enough with the false rumors.”

The tweet raised eyebrows since there has not been a lot of public talk about Haley replacing Pence as Trump’s running mate.

“Vice President Pence has been a dear friend of mine for years,” she wrote in the tweet. “He has been a loyal and trustworthy VP to the president. He has my complete support.”

Trump officially kicked off his 2020 reelection bid with a campaign rally in Orlando, Florida in June.

The Hill-HarrisX survey was conducted online among 404 Republican voters between Aug. 23 and 24 with a margin of error of plus or minus 4 percentage points.

4 hours ago
The Debrief
3 days ago