A plurality of voters say lawmakers should put more limits on the use of the Senate’s legislative filibuster, according to a new poll.

Forty-seven percent of registered voters said that the Senate should restrict use of the procedural hurdle which requires legislation get 60 votes before lawmakers can end debate, based on the Hill-HarrisX survey released on Friday. Another 41 percent of those polled said the rules on the filibuster should remain the same. 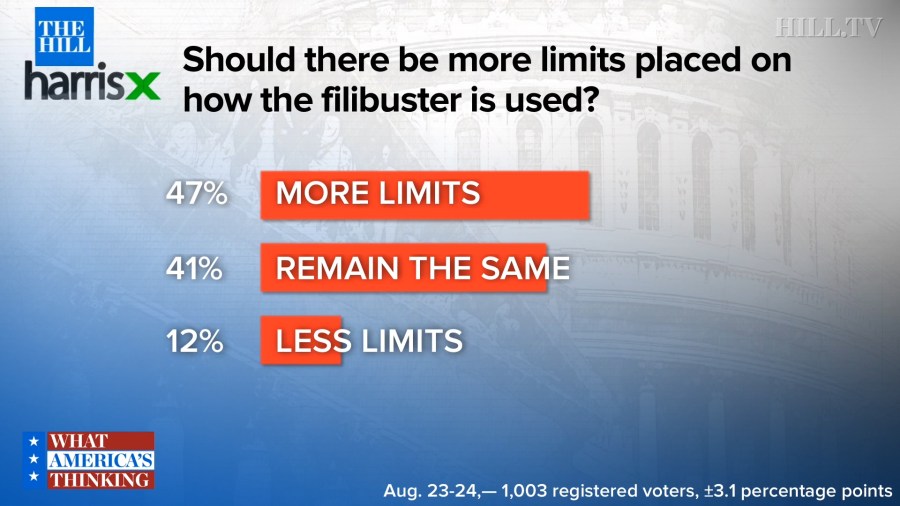 Just 12 percent of thought there should be fewer restrictions on its use in place.

When broken down by party, Democratic voters were more inclined to be in favor of putting more limits on the Senate rule with 51 percent support.

Almost half of Republicans and independent voters were also supportive of such a move. Forty-six percent of GOP respondents said they would support limiting the filibuster, compared to 42 percent of independents.

The survey comes amid a growing push among Democrats to abolish the Senate filibuster.

Rep. Joe Kennedy III (D-Mass.), who is currently considering a Senate bid, suggested Thursday that the Senate filibuster needs to be changed or scrapped altogether.

“If we can’t update that system to respond to the will of the voters then the system wasn’t any good to begin with, and you’re gonna have to challenge it to make it better,” Kennedy told a local news station in Boston.

Former Senate Majority Leader Harry Reid (D-Nev.) also predicted this week that the Senate would soon nix the rule, saying its benefits are “far outweighed by the detriment.”

“What kind of a country do we have, if we’re a democracy, and it takes 60 votes to pass anything?” Reid asked.

Democratic leadership, meanwhile, is keeping the door open to eliminating the filibuster if the party takes back the Senate in the 2020 elections. Senate Minority Leader Charles Schumer (D-N.Y.) said in July that “nothing is off the table.” But, even Democrats successfully take back the Senate, they would need a near unanimous support to ditch the rule.

Democrats aren’t the only ones who have expressed frustration with the 60-vote threshold.

Trump has also repeatedly urged Senate Majority Leader Mitch McConnell (R-Ky.) to eliminate the filibuster arguing that the rule has allowed Democrats to stonewall his agenda. McConnell has openly opposed such a move, saying that the caucus doesn’t have enough votes to kill it.

The Hill-HarrisX poll was conducted online among 1,003 registered voters between Aug. 23 and Aug. 24 with a margin of error of plus or minus 3.1 percentage points.