Poll: 62% of voters open to reelecting Trump, up from last year 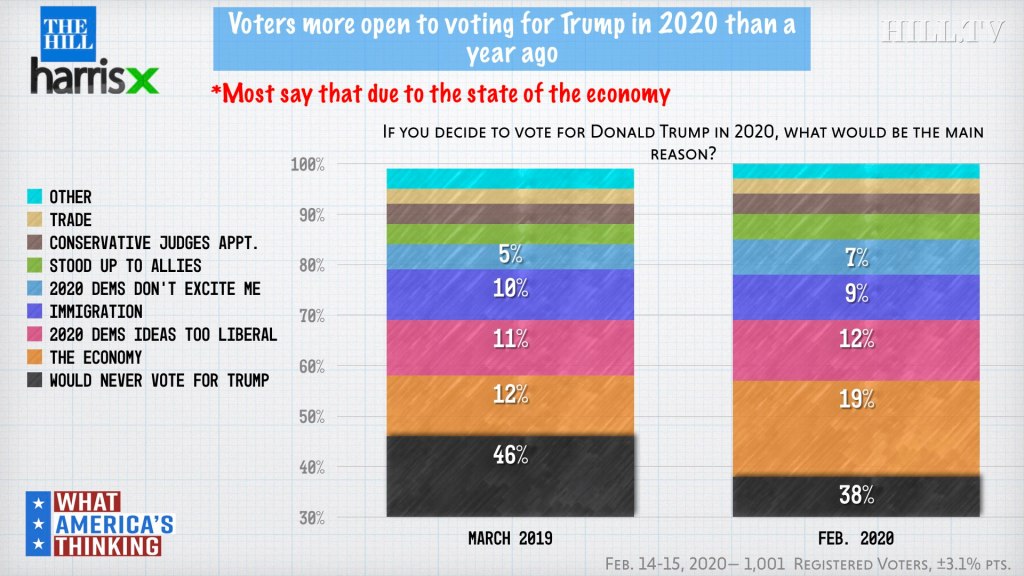 A majority of voters are open to reelecting President Trump in 2020, up from a year ago, according to a new Hill/HarrisX poll.

The state of the economy proved to be the main reason voters would re-elect Trump, at 19 percent, up 7 percentage point from when this survey was last taken. Other top reasons were the current field of Democratic Presidential candidates pushing ideas that are too liberal, at 12 percent, and his tough stance on immigration, at 9 percent.

“The primary reason for that turnaround is public perception of the state of the economy. It is the single largest reason in the poll (at 19%), and the only reason that has shown significant growth from a year ago,” B.J. Martino, Republican pollster and Partner at The Tarrance Group, told The Hill.

“At the same time, observers should not sleep on the impact of views of the Democratic field,” he added. “A strong economy combined with dubious field of Democrat is providing a clear opportunity for the Trump campaign. The President can now make his case to a segment of voters who only a year ago said they would never vote for him.”

For Independents who said they’d consider Trump in 2020, the economy and concerns regarding the 2020 Democratic field were the top two reasons, at 22 percent each.

“The context in which the election is held will matter greatly: when looking at the economy, Trump’s approval is much higher and in the upper-50s.” said Dritan Nesho, CEO of HarrisX which conducts The Hill/HarrisX poll.

“Polls therefore suggest it’s an open contest that gives the advantage to Trump if fought on the background of a strong economy and staying the course versus very liberal democratic policies like the Green New Deal or Medicare for All.” He added.

Trump is in the midst of attending a slew of campaign rallies to ramp up his 2020 re-election efforts and plans to end his trip in Nevada on the eve of the state’s primary caucuses.

The Hill-HarrisX poll was conducted online among 1,001 registered voters between Feb. 14 and 15. It has a margin of error of plus or minus 3.1 percentage points.