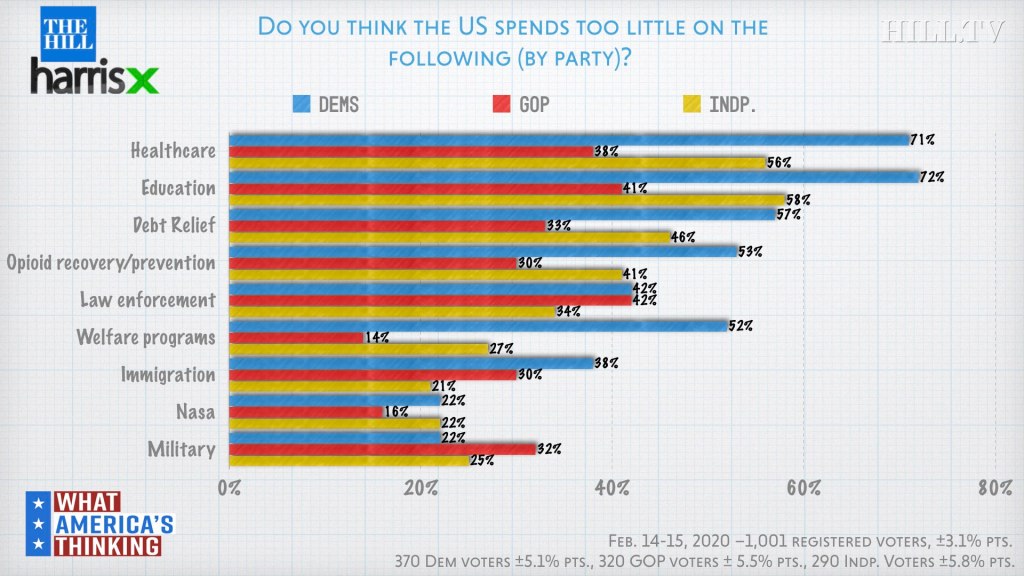 Majorities of Democratic and independent voters say in new Hill/HarrisX poll that the U.S. government spends too little on education and health care.

Seventy-two percent of Democratic voters say not enough is spent on education, while 71 percent say the same of health care.

Education and health care are also the top two areas in which independent voters said the country spends too little, at 58 and 56 percent, respectively.

While Republican voters are more split over government spending, they are more likely to point to education and law enforcement as lacking in funding.

Sentiments of voters overall mirrored those of Democrats and independents, with 58 percent of registered voters saying the U.S. spends too little on education and 56 percent saying the same of health care.

The new poll also found a significant gender divide on spending in education and health care.

Sen. Bernie Sanders (I-Vt.), a Democratic presidential candidate who self-identifies as a democratic socialist, is gaining momentum in the 2020 race, having just won the Nevada caucuses over the weekend by a large margin.

His victory has the Democratic establishment concerned that his progressive, big-ticket proposals will turn off moderate voters, making it hard for him to beat President Trump in a general election.

The Hill-HarrisX poll was conducted online among 1,001 registered voters between Feb. 14 and 15. It has a margin of error of 3.1 percentage points.