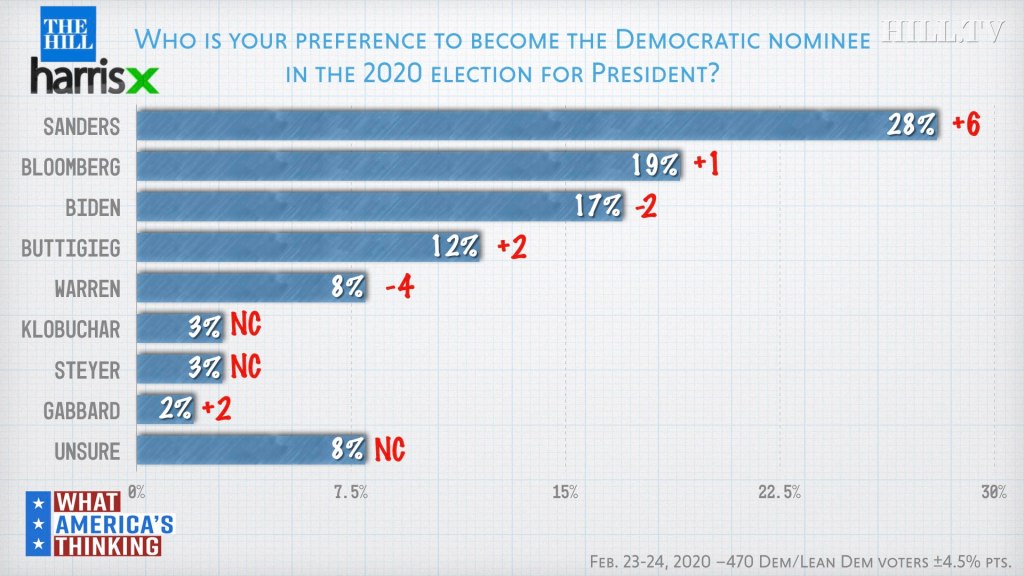 Seven Democratic presidential candidates are gathering in Charleston, S.C., on Tuesday night for the tenth Democratic debate, just a few days before the state’s primary election.

Though Sanders seems to be riding on post-Nevada momentum and a promising outlook heading into Super Tuesday, some experts believe the contest isn’t yet a done deal.

“While Bernie is beginning to put together an impressively diverse coalition that includes a plurality of black and brown voters, his inability to attract the same level of support from white voters, older voters, and from Democrats more broadly, is the reason he seems to plateau around 30 percent in every poll,” Terrance Woodbury, Democratic pollster and Partner of Hit Strategies, told The Hill.

“With multiple well-funded candidates with the resources to remain in the race for the long haul, this is the formula for a brokered convention where no one emerges with a clear majority of delegates,” he added.

The Hill-HarrisX poll was conducted online among 470 registered Democratic and Democratic-leaning independent voters between Feb. 23 and 24. It has a margin of error of plus or minus 4.5 percentage points.