Around two-thirds of Americans say they support a “wealth tax” on billionaires in an effort to close the wealth gap in the country, according to a new Hill-HarrisX poll.

Sixty-seven percent of registered voters surveyed in the poll released Wednesday said billionaires should be targeted and have to pay a wealth tax to cut down on inequality, while 33 percent opposed such an effort.

The survey found majority support for such a tax among Democrats and independents, at 85 percent and 66 percent, respectively. Republicans were more divided, with 53 percent saying the ultra-rich should not be subjected to an additional tax and 47 percent in favor.

The survey also found differences in opinion among those in different income groups, with voters who earn more than $75,000 a year less in favor of taxing billionaires (63 percent) compared to those earning less than that amount (70 percent). 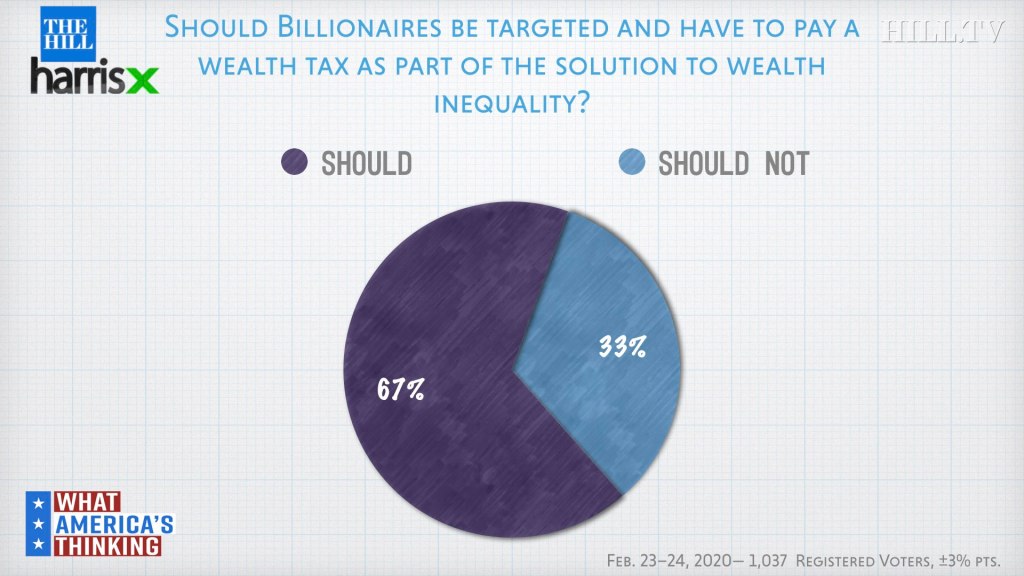 The data is consistent with past surveys on the issue. In a February 2019 poll, 74 percent of registered voters said they would support an annual 2 percent wealth tax on those with assets over $50 million, and a 3 percent tax on people with assets in excess of $1 billion.

“Increasing taxes on wealthy Americans has consistently garnered lopsided support among the public. Further, an increasing number of Americans believe that the wealthy are not paying their fair share of the tax burden,” Daniel Cox, research fellow in polling and public opinion at the American Enterprise Institute, told The Hill.

“And there is growing concern about the influence large corporations and wealthy individuals have on American elections. The Hill poll fits this broader pattern. Two-thirds of Americans support the adoption of a ‘wealth tax’ on billionaires. It’s notable that nearly half of self-identified Republicans support this policy as well. It suggests that while many Republicans may have reservations about raising taxes on the middle-class and the moderately well-off, when it comes to the uber-wealthy far fewer GOP voters object,” he added.

Several Democratic presidential hopefuls including Sens. Bernie Sanders (I-Vt.) and Elizabeth Warren (D-Mass.) have put wealth inequality at the forefront of their White House bids, with both advocating for wealthier Americans to pay more in taxes.

The progressive candidates have introduced proposals that would tax the ultra-wealthy in order to pay for big-budget items like Medicare for All, which the candidates argue would relieve some of the economic burden of middle- to lower-class Americans.

Vanessa Williamson, senior fellow at the left-leaning Brookings Institution and author of “Read My Lips: Why Americans Are Proud to Pay Taxes,” told The Hill: “Poll after poll demonstrates a consistent fact of American public opinion: progressive taxation is popular.”

The Hill-HarrisX poll was conducted online Feb. 23-24 among 1,037 registered voters. It has a margin of error of plus or minus 3 percentage points.

1 week ago
THE HILL TV
2 weeks ago