President Trump is trailing a generic Democratic presidential candidate by 7 points with a little under eight months to go before Election Day, according to a Hill/HarrisX poll released Friday.

Forty-six percent of registered voters in the poll said they would vote for the Democratic nominee compared to 39 percent who said they’d support Trump. Another 15 percent were unsure. 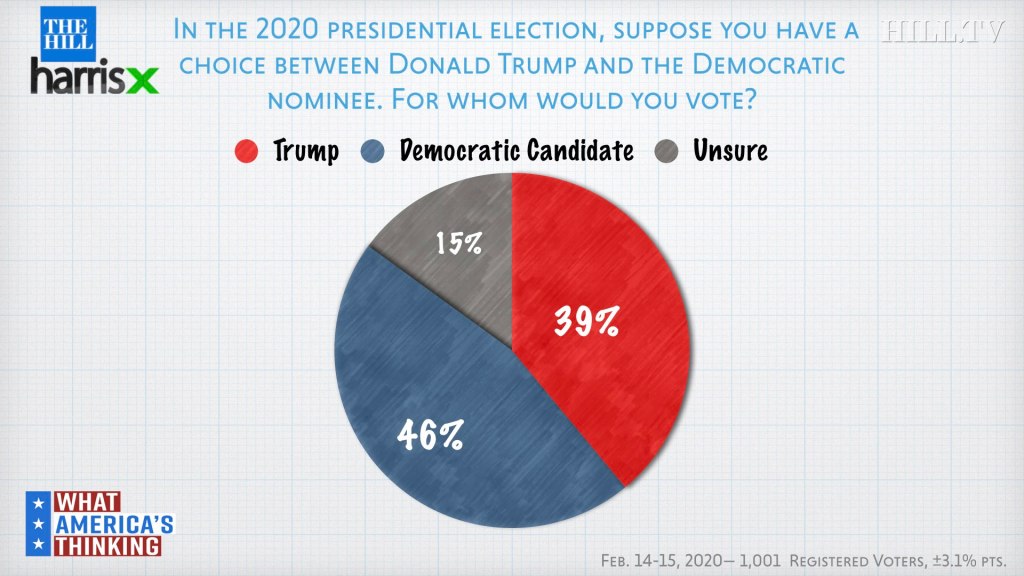 Among independents, Trump currently trails by 8 points against a generic Democratic nominee, 30 to 38 percent, while the poll found that more than a third of independents are still unsure who they will vote for in the fall.

Molly Murphy, a Democratic pollster and partner at ALG Research, pointed to the gender gap as a potential warning sign for the president.

“Trump continues to struggle with women voters, and if he is not able to close that gap he is going to have a very difficult time in his reelection,” she told The Hill.

B.J. Martino, a Republican pollster and partner at The Tarrance Group, noted that either former Vice President Joe Biden or Sen. Bernie Sanders (I-Vt.) will likely face off against Trump in November, and surveying voters about a specific candidate going up against Trump could change the poll results.

“Thankfully, the quote ‘Democratic Nominee’ will not be listed on the ballot in November. It will be the name of one of two men, both of whom already carry net negative images among the American voters. A ballot test against a spotless generic opponent is wishcasting,” he told The Hill.

The Hill-HarrisX poll was conducted online among 1,001 registered voters between Feb. 14-15. It has a margin of error of plus or minus 3.1 percentage points.