Forty-six percent of registered voters surveyed approve of the job President Trump is doing, with 54 percent disapproving in the survey which was conducted from March 8-9.

That marks a 3 percent drop in Trump’s approval rating from a survey taken on Feb. 1-2, which showed 49 percent approving and 51 percent disapproving. Still, the decrease is within the poll’s margin of error. 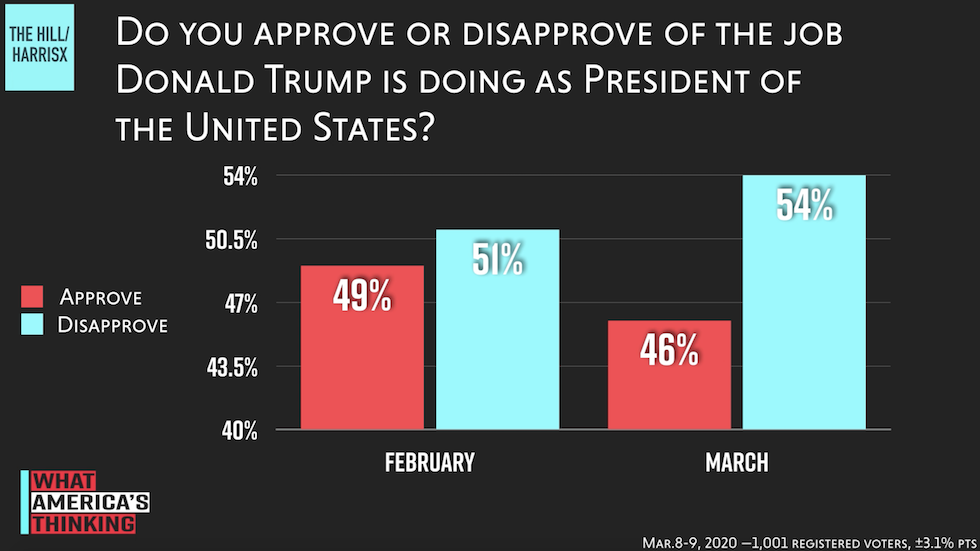 Experts say one possible reason for the decline could be the coronavirus outbreak.

“When it comes to these sort of exogenous external forces like a natural disaster or a terrorist attack, how an administration responds is critically important.” Daniel Cox, research fellow in polling and public opinion for the American Enterprise Institute, told The Hill.

A Morning Consult poll released on March 6 found that 44 percent of voters approved of Trump’s handling of the coronavirus crisis with 42 percent disapproving. The poll noted that Trump’s net approval on the issue was down 2 points from a month ago.

As the disease continues to spread in the United States and worldwide, there has been growing criticism of the Trump administration’s handling of the coronavirus.

Critics say President Trump has delivered confusing messages about the virus, claiming that he believed the numbers would drop, and have accused federal agencies of being slow to allow local officials to test for the virus.

The outbreak has also led to a sharp fall in financial markets in recent days. The White House and lawmakers are in negotiations over a package to counter the economic fallout of the virus.

Trump is reportedly considering delivering an address the nation on the coronavirus.

“This represents a real threat to the Trump administration and the Trump presidency and we’ll see how this plays out in the next six months. But I think that almost more than anything else will be critical, that and the economic repercussions.” Cox added.

The number of cases in the U.S. has passed 1,000. The World Health Organization (WHO) on Tuesday officially categorized the virus, COVID-19, as a pandemic.

The Hill-HarrisX poll was conducted online among 1,001 registered voters between March 8-9. It has a margin of error of plus or minus 3.1 percentage points.