Former Vice President Joe Biden has solidified his lead in the 2020 Democratic primary race, according to a new Hill/HarrisX poll. 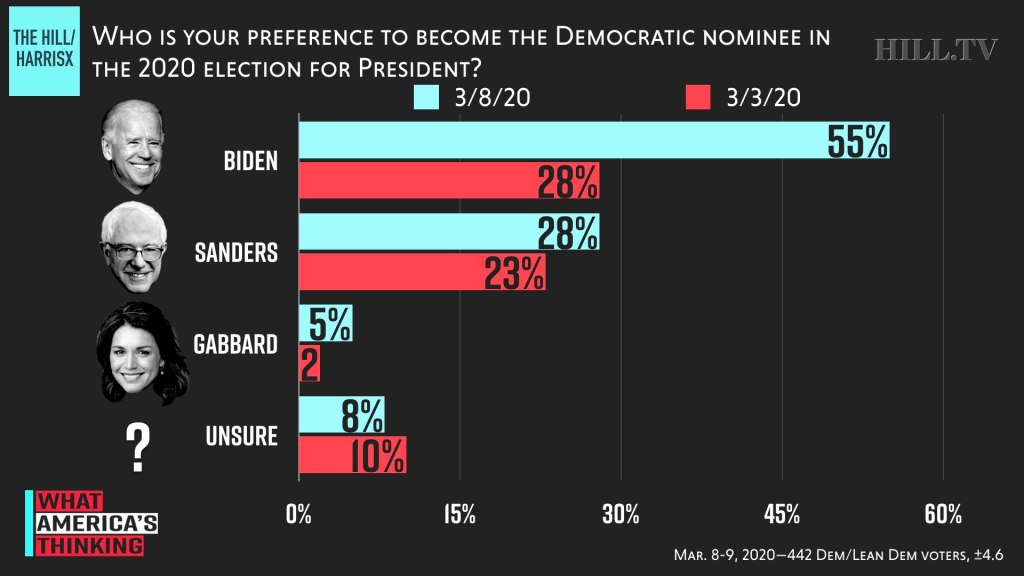 “Turnout is up, so a lot of that 2018 coalition that helped produce the blue wave and the new Democratic House majority has come out and consolidated behind Joe Biden,” Nancy Zdunkewicz, Senior Pollster of Change Research, told The Hill.

Despite having disappointing returns in the primary contests so far, Sanders announced this week that he is remaining in the race and looking forward to facing Biden in Sunday’s Democratic debate, alluding to an aggressive performance by the Vermont senator.

“The contrast will definitely be more clear in this debate when you see Joe Biden and Bernie Sanders, the two of them on stage,” Zdunkewicz added. “What’s different is this post-2016 world where people may have less of an appetite for it. After 2016, we elected Donald Trump and people just want to fall behind the person who is going to be able to defeat him in November.”

The March 15 Democratic debate was moved from Phoenix to Washington, D.C. amid increasing nationwide anxiety over the coronavirus pandemic, which is beginning to severely impact the 2020 race.

The Hill-HarrisX poll was conducted online among 442 registered Democratic and Democratic-leaning independent voters between March 8-9. It has a margin of error of plus or minus 4.6 percentage points.