More than half of Democrats and Democratic-leaning registered voters in the poll, 55 percent, said Biden should be the party’s next nominee, compared to 31 percent for Sanders.

Sanders gained 3 points since a previous survey released last week, while Biden has held onto his double-digit lead in the poll. 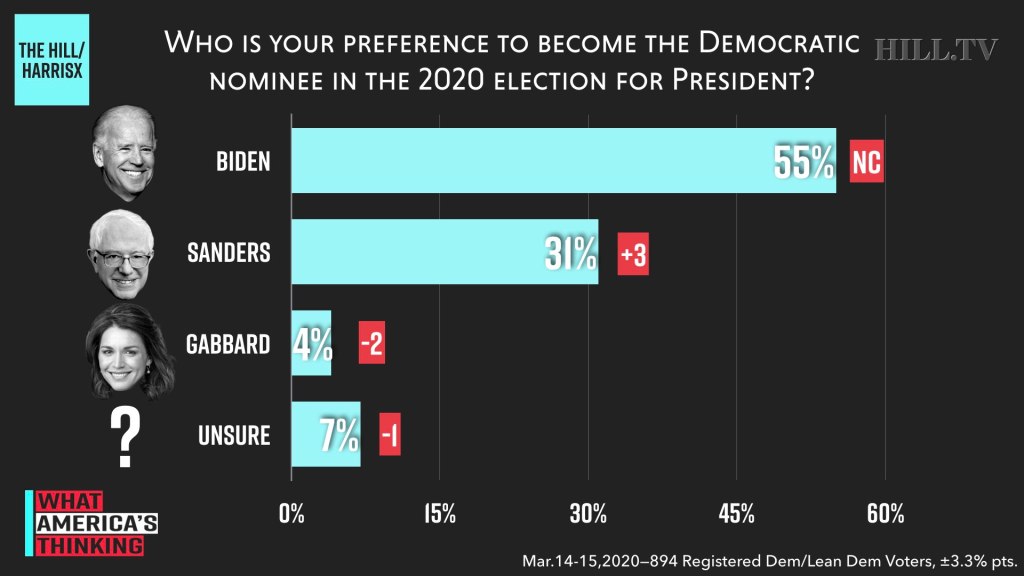 The survey also found Rep. Tulsi Gabbard (D-Hawaii) with 4 percent support, a 2-point drop from last week. Another 7 percent of voters said they were unsure who they would support.

The survey was conducted in the days leading up to the latest series of primaries on Tuesday, where Biden extended his delegate lead by sweeping all three states that held voting.

“What these latest polling numbers tell me is that the nomination looks pretty clear for Joe Biden,” Mallory Newall, Director of Research for Ipsos Public Affairs, told The Hill. “It tells me that the Democratic base is starting to coalesce around him,” she added.

Biden clinched victories in Arizona, Florida and Illinois on Tuesday, putting him on the cusp of an insurmountable delegate lead over Sanders.

Sanders has used the pandemic as a way to advocate for his “Medicare for All” health care plan, which has polled well in primary exit polls this cycle.

Health care also remains one of the top issues for Democratic voters.

“What this primary comes down to is whoever can beat President Trump, full stop. That is what Democrats care about and that is what I think is starting to more and more shape their views and shape their voting in these primary elections,” Newall added.

The Sanders campaign said Wednesday that the senator plans to assess his candidacy after Tuesday’s losses.

The Hill-HarrisX poll was conducted online among 894 registered Democratic and Democratic-leaning independent voters. It has a margin of error of plus or minus 3.3 percentage points.