A majority of American voters say they believe the Trump administration is taking strong enough measures to combat the coronavirus pandemic, according to a new survey. 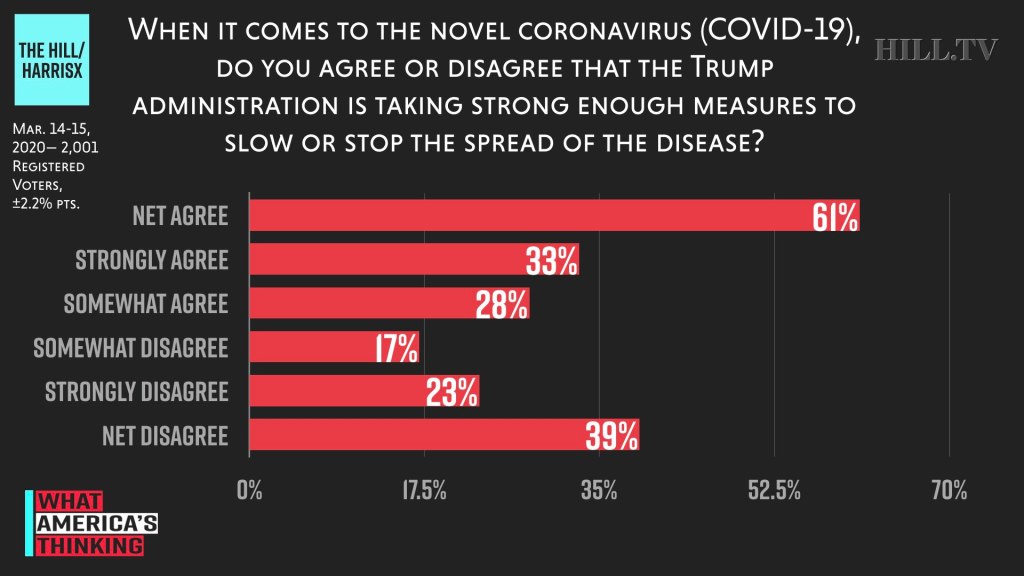 Karlyn Bowman, public opinion analyst and senior fellow at the American Enterprise Institute, says the poll could be reflecting the “rally-round effect.”

“Publics tend to rally around their presidents in time of national emergency, and it’s something we’ve observed in many situations,” Bowman told The Hill.

“We’re seeing strong agreement in many polls that the Trump administration is taking strong measures,” she added, “that said, I think we have to be cautious about the deep differences on Republicans, Democrats, and Independents on your question. We’re seeing that in other polls too, which indicates that partisan disagreements are still there, still very powerful and that could limit the rally.”

The March 14-15 survey found 88 percent of Republican voters agreed that the Trump White House was taking strong enough measures to combat coronavirus, along with 57 percent of independents.

However, only 41 percent of Democratic voters felt the same.

The president is receiving mounting pressure to invoke the powers of the Defense Production Act, which would enable mass production of equipment needed to combat the disease such as protective masks, ventilators, and tests.

Hospitals and healthcare workers have reported shortages of such supplies and warn it will only get worse in the coming weeks.

The Hill-HarrisX poll was conducted online among 2,001 registered voters between March 14-15. It has a margin of error of plus or minus 2.2 percentage points.