Poll: 59 percent say coronavirus crisis has had a negative effect on their finances

A majority of voters say their finances have taken a hit from the coronavirus crisis, according to a new Hill-HarrisX poll.

Fifty-nine percent of registered voters in a March 22-23 survey said the pandemic has had a negative impact on their financial situation, while 10 percent said it had a positive effect.

Thirty-two percent of respondents said the outbreak has not affected their finances. 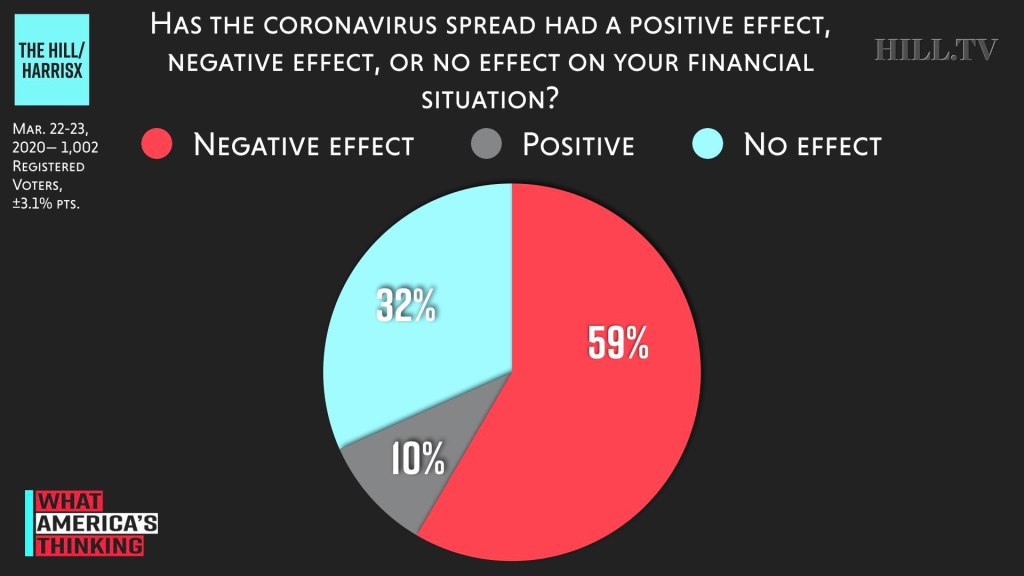 While majorities of all demographics reported negative financial effects, those who said they were hit the hardest included women, younger adults, higher-earning individuals and Democrats.

By age group, adults under the age of 35 reported the worst financial situation, with 61 percent saying they’ve taken a hit. Older respondents, age 65 and up, reported the least damage, at 56 percent.

The poll also found that respondents who earn $75,000 or more a year were more likely than lower-income respondents to have had a negative financial impact thus far.

By party, 64 percent of Democrats and 53 percent of Republicans said their finances were suffering. Fifty-eight percent of independents said the same.

“Democrats appear to be hit hardest by the coronavirus economic crisis – as are American households earning over $75,000, although the effect is negative across all income groups,” Dritan Nesho, CEO and chief researcher of HarrisX, told The Hill.

He said that provides “an opportunity” for former Vice President Joe Biden and President Trump.

“Look for a contest of messages and approaches from the key 2020 candidates on this front, with public health and the economy weighted in the balance,” Nesho said.

The Hill-HarrisX poll was conducted online among 1,002 registered voters. It has a margin of error of plus or minus 3.1 percentage points.