President Trump’s approval rating has fallen in the Hill/HarrisX poll since he said he may “reopen” the economy by Easter despite the coronavirus pandemic spreading through the country.

Trump’s approval rating on handling the coronavirus dropped 6 percentage points in a three-day span in the poll.

In the Mar. 26-27 survey, 50 percent of registered voters said they approved of the president’s handling of COVID-19, compared to 56 percent saying the same in a Mar. 22-23 survey. 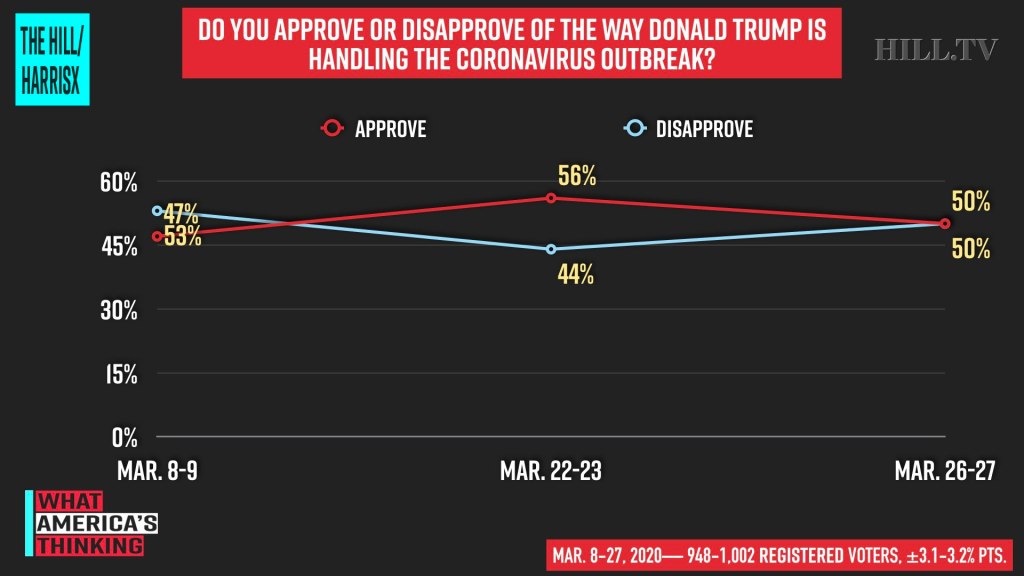 The drop appears to be driven by a decrease in support from Republican and independent voters.

Support among independents slipped 7 percentage points, from 55 percent to 48 percent.

Among Democrats, support remained steady at 29 percent, a 1 point dip.

Trump’s approval ratings have been on the relatively high end amid the coronavirus crisis, something some attribute to Americans rallying around their leader during a national trauma.

“The important thing about a ‘rally ’round the flag effect’ is that it doesn’t necessarily have anything to do with the actions that are being taken by the government at that time,” Robert Griffin, research director at Democracy Fund Voter Study Group, told The Hill.

“It has a lot more to do with the American publics response to a crisis. They want to give leaders a little bit of lee-way, they want to give them the benefit of the doubt, in a time when the country is in crisis,” he added.

As the country struggles to battle the coronavirus outbreak, Republican pollster and Partner of the Tarrance Group, B.J. Martino, says the weeks ahead will be crucial to Trump’s reelection efforts.

“How he deals with this crisis in this moment is the most important thing and all the polling reflects that voters want to see this crisis handled,” he added.

The Hill-HarrisX poll was conducted online among 984 registered voters between March 26-27. It has a margin of error of plus or minus 3.2 percentage points.