Fifty-four percent of Democratic and Democratic-leaning independents back the former vice president while 32 percent choose Sanders. 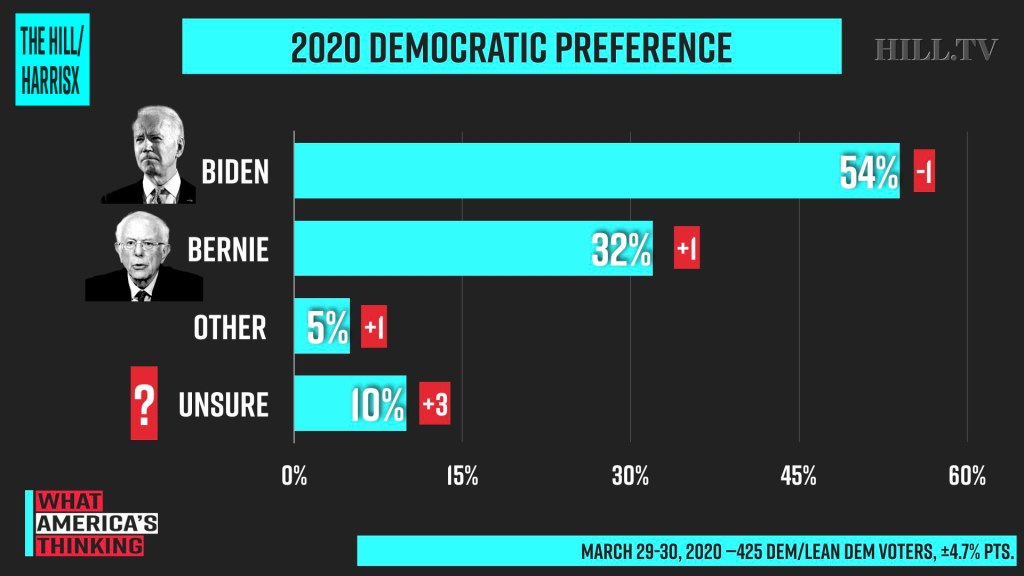 Five percent of voters in the poll said “other” and 10 percent reported being unsure, a 3 percentage point uptick from the same survey on March 14-15.

The two White House hopefuls have been focused on the coronavirus pandemic in recent weeks, conducting virtual roundtables and daily briefings while abstaining from rallies and most in-person events.

States such as Georgia, Louisiana, Ohio and New York have all pushed back their primary election dates to focus on battling the global pandemic.

Despite Biden’s commanding lead in the polls and among pledged delegates, Sanders has said he still wants to debate his rival again, though Biden has expressed disinterest, saying he thinks it’s time to pivot to the general election.

Writer, attorney and activist Malaika Jabali noted the importance of the national platform a debate offers.

“If you think technically it’s possible but it might not probable for Sanders to win, there’s still an ideological debate that’s happening within the Democratic Party,” Jabali told The Hill.

“If we do not allow this arena to be able to play those issues out, we can continue with more year with the same kind of austerity cuts that Biden himself has advocated for,” she added.

The Hill-HarrisX poll was conducted online among 425 registered Democratic and Democratic-leaning independent voters. It has a margin of error of plus or minus 4.7 percentage points.