Poll: 57% of voters say US political system works only for insiders with money & power

A majority of voters believe the U.S. political system only works for insiders with money and power, a new Hill-HarrisX poll finds.

Fifty-seven percent of registered voters said the country’s political system works for the elite while 32 percent said it works for everyone.

Eleven percent of voters said the U.S. political system works for no one. 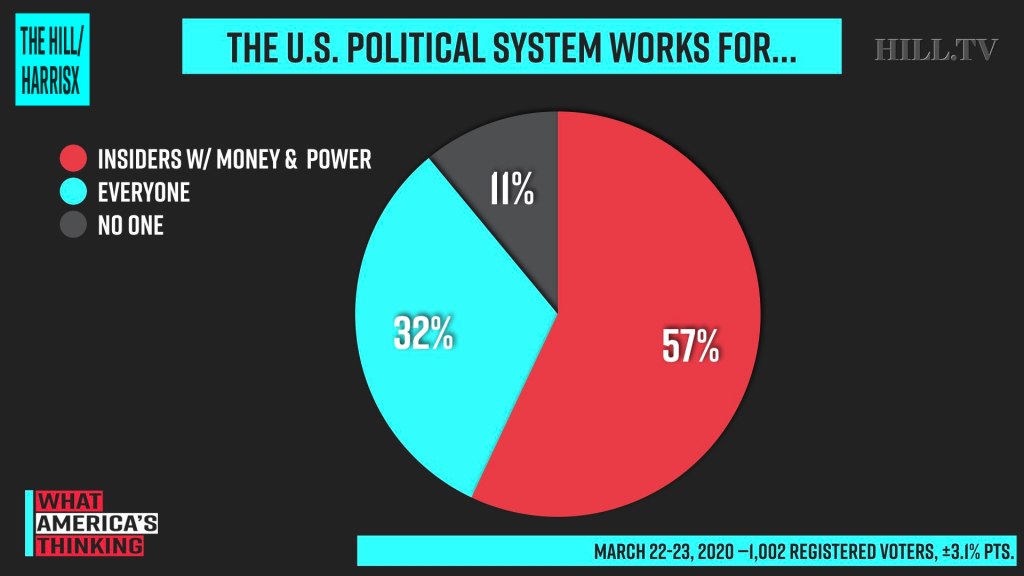 The poll found various demographic splits on the issue.

Democrats and Independents were more likely than Republicans to say the political system only works for insiders.

Seventy-one percent of Democratic voters and 60 percent of Independent voters felt this way about the political system compared to 39 percent of Republican voters.

The poll found Republican voters to be the only sub-group to hold a majority view that the U.S. political system works for everyone.

“This is a very clear concern that the majority of voters have that the economic system and the political system, which of course are intertwined, only work for those who are wealth or who are well connected,” Felicia Wong, President and CEO of the Roosevelt Institute, told The Hill.

“I think the thing to look at though is how that is going to, again, effect and be affected by the current economic crisis,” she added.

The polling results come on the heels of the passage of an economic stimulus package aimed to provide relief to Americans during the fallout of the coronavirus pandemic.

Some have criticized the package for giving too much relief to corporations and not enough to the average American worker.

“The American public is very concerned that the money be used to support workers, to keep employees on payroll and that it not be used for things like stock buybacks or excessive CEO pay,” Wong said.

The Hill-HarrisX poll was conducted online among 1,002 registered voters between March 22-23. It has a margin of error of plus or minus 3.1 percentage points.