President Trump’s approval numbers on jobs and the economy remain in the upper 50s even as unemployment skyrockets and market volatility continues amid the coronavirus crisis, according to the latest Hill-HarrisX poll. 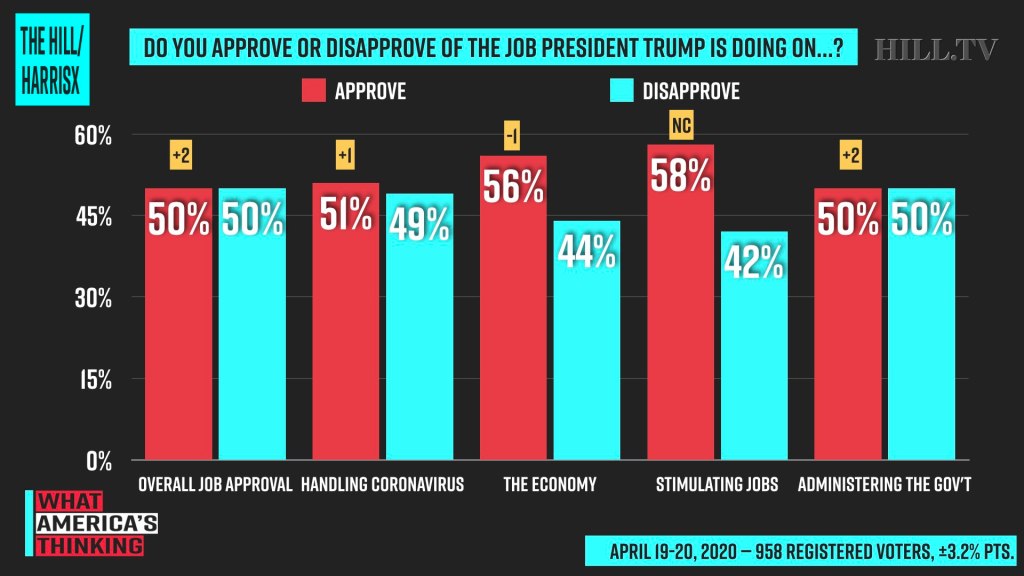 Fifty-eight percent of voters approve of Trump’s performance stimulating jobs, while 56 percent approve of his overall handling of the economy, according to the poll.

For the remaining issues polled in the April 19-20 survey, the president’s approval numbers are slightly lower but still break 50 percent.

“Trump’s job approval is like a fixed point in the universe,” B.J. Martino, Republican pollster and partner at the Tarrance Group, told Hill.TV.

More than 20 million Americans have filed for unemployment benefits in the past month, wiping out years of job growth since the 2008 recession.

On Tuesday, Congress and the White House reached a deal on an interim funding package meant to provide additional relief to small businesses that have taken a hit amid the coronavirus outbreak.

On Monday, President Trump announced via tweet that, in efforts to protect American jobs, he plans to sign an executive order temporarily banning immigration to the U.S.

While those pushing back on Trump’s decision say it’s more of an effort by Trump to enthuse his base and distract from his  COVID-19 response than to save American jobs, Martino is skeptical it will sway voters’ opinions of the President.

“I think how people react to this is going to be entirely through the lens of how they fundamentally feel about the president,” Martino told Hill.TV.

The Hill-HarrisX poll was conducted online among 958 registered voters on April 19-20. It has a margin of error of plus or minus 3.17 percentage points.