Poll: 69 percent of voters support Medicare for All

Support for Medicare for All has remained consistently strong over the past two years, according to a new Hill-HarrisX poll.

Sixty-nine percent of registered voters in the April 19-20 survey support providing medicare to every American, just down 1 percentage point from a Oct. 19-20, 2018 poll, and within the poll’s margin of error. 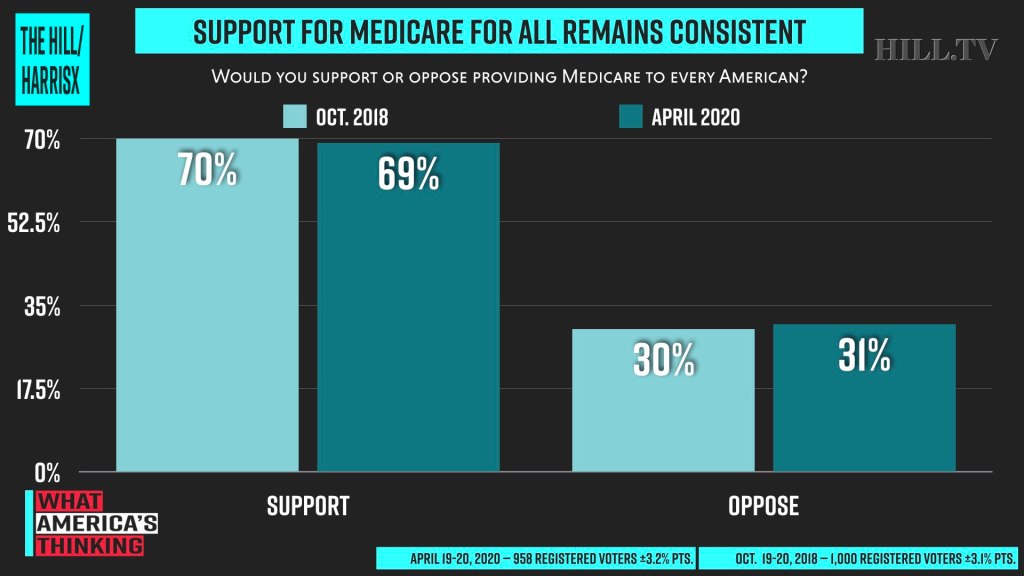 Popularity for Medicare for All grew slightly among Democratic voters, with a 2 percentage point increase from 2018.

Support among independent voters was steady at 68 percent.

However, support among Republican voters declined 6 percentage points over the course of two years, from 52 percent support in 2018 to 46 percent in 2020.

This is consistent with recent data from the Kaiser Family Foundation which found Republican support for a single payer system has declined over time.

Progressive lawmakers have been pointing to the coronavirus crisis to make a case for the need for Medicare for All as millions of Americans are kicked off their employee-based health insurance due to the economic fallout of the pandemic.

“But it’s not a sure thing, it’s not going to happen automatically. It does require leadership at the end of the day,” he added.

President and CEO of the Roosevelt Institute, Felicia Wong, believes support for Medicare for All will only grow amid the coronavirus crisis.

“These progressive policies have been popular for a long time. I think COVID-19 will make them more popular as it becomes clear just how fragile our American political economy really is,” Wong told Hill.TV.