Poll: 67 percent of voters support voting exclusively by mail in 2020

A majority of voters support the use of mail-in ballots in the 2020 general election, a new Hill-HarrisX poll found.

Sixty-seven percent of registered voters in the April 19-20 survey approved of states holding elections exclusively using mail-in voting rather than having people go in-person to the polls, while 33 percent disapproved. 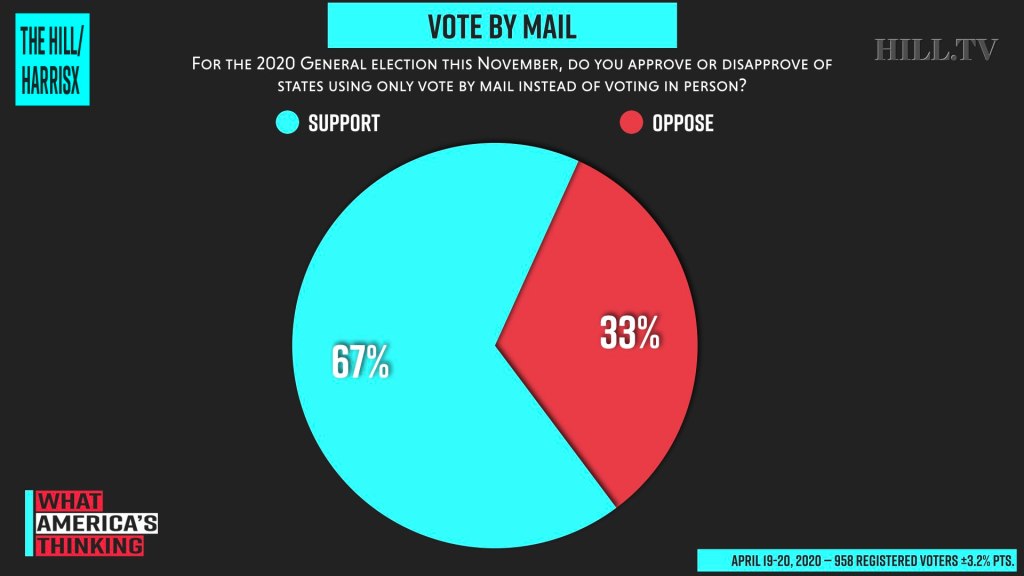 There were, however, partisan differences in responses.

Eighty-one percent of Democratic voters and 67 percent of independent voters said they were in favor of mail-in voting only in November. Republican voters were almost evenly split.

As social distancing measures continue across the country to slow the spread of COVID-19, voting rights activists have been pushing for mail-in ballot provisions to be added in the stimulus packages to ensure that Americans can vote without exposing themselves to crowds.

While some funding was provided in the third coronavirus relief bill, they say much more is needed to prepare for November.

President Trump has pushed back on vote-by-mail efforts.

In early April he tweeted, “Republicans should fight very hard when it comes to state wide mail-in voting. Democrats are clamoring for it. Tremendous potential for voter fraud, and for whatever reason, doesn’t work out well for Republicans.”

“One of the unfortunate things that has happened during the middle of this conversation about vote-by-mail is that people have got it into their heads that vote by mail is somehow going to advantage on party over another,” Robert Griffin, Research Director at the Democracy Fund Voter Study Group, told Hill.TV.

“The overwhelming evidence that we have from political science is that vote-by-mail has a non-partisan effect,” he added.

A recent study found that universal vote-by-mail does not give either party a political advantage.

Experts warn of a second wave of the coronavirus hitting the U.S. in the fall, just when the presidential election is set to take place.

“It’s really important for us to pay attention to the evidence and not get locked in to the idea that this is just a zero sum game,” Griffin told Hill.TV.

1 day ago
Rising
3 days ago