President Trump’s job approval ticks up to 51 percent, up 1 percentage point from two weeks ago, according to a new Hill-HarrisX poll. 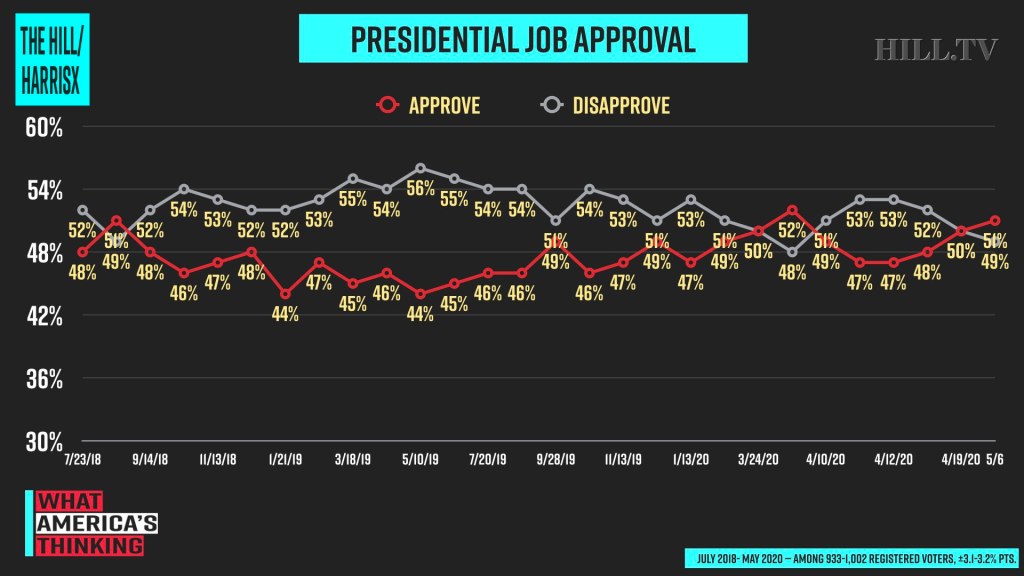 In an April 19 survey, Donald Trump’s job approval was at 50 percent among registered voters.

His approval has fluctuated only slightly throughout his presidency. Hill-HarrisX data shows his lowest recorded approval at 44 percent in a January 2019 survey and its highest approval at 52 percent in a April 2020 survey.

“President Trump’s approval rating is one of the really fascinating and hard to understand or hard to park facets of modern American public opinion,” Chris Jackson, Vice President of Ipsos, told Hill.TV.

“It has been remarkably stable over the last three years of his presidency with only moving a few percentage points up or down in any single moment in time despite a series of increasingly outlandish and wild events,” he added.

Jackson cited the impeachment trial and the current coronavirus pandemic as one of these events in which the President has seen his historically steady approval rating hold.

The Hill-HarrisX poll was conducted online among 957 registered voters on May 6. It has a margin of error of plus or minus 3.17 percentage points.