Thirty-four percent of Democrats in the May 11-12 poll believe the harassment claims made by former Senate staffer, Tara Reade, and 30 percent believe the sexual assault accusations. 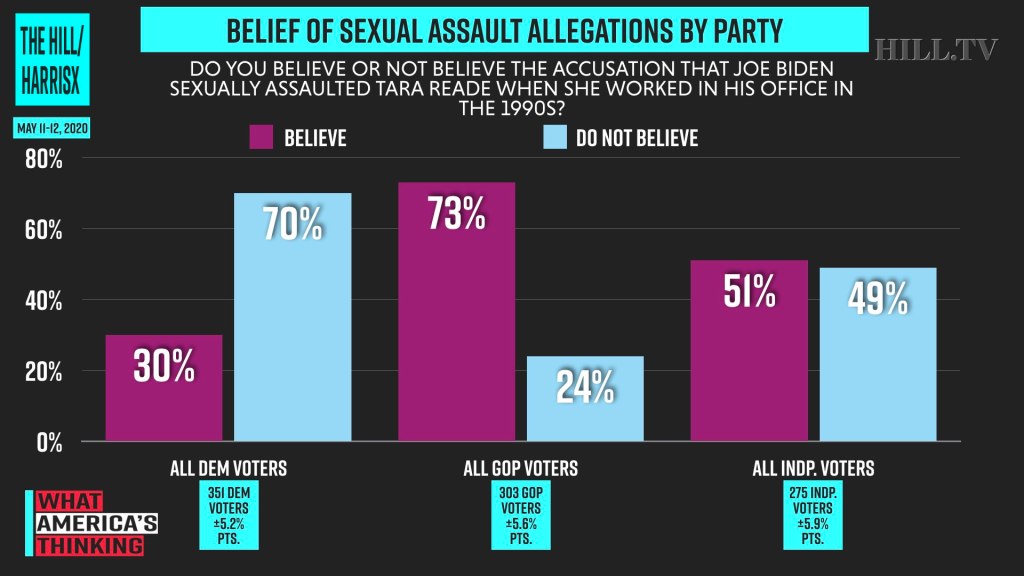 Registered voters overall are split on the issue, however, with 53 percent who said they believe the harassment claims and 50 who believe the assault accusations against Biden.

If the allegations are proven true before the election, a majority of voters in the Hill-HarrisX survey (57 percent) said Joe Biden should remove himself from the ticket and allow the Democratic Party to replace him, including 44 percent of Democratic voters.

If the allegations are neither proven nor disproven before the election, most voters say Biden should stay on the ballot.

Another notable finding from the survey is almost 6 in 10 voters, 58 percent, believe the burden of proof lies with the accuser, Tara Reade.

Both Biden and Trump have denied the allegations against them.

“The Tara Reade allegations are a 50-50 issue and independents are the battleground,” Dritan Nesho, CEO and head pollster of HarrisX, told Hill.TV.

“Context matters when dealing with these issues: These type of allegations do not play well with voters, and do harm candidates, but elections are also about a choice. Voters still view harassment allegations towards Trump as being worse than these new allegations towards Biden. Voters also believe the onus of proof for the Reade allegations is with the accuser, and if no proof is found they want Biden to remain in the race. If proof is found, then it remains to be seen whether the Reade allegations are disqualifying for Biden or not – much depends on how this issue plays out from a communications perspective.” Nesho added.

The Hill-HarrisX poll was conducted online among 948 registered voters between May 11 and 12. It has a margin of error of plus or minus 3.18 percentage points.

The Debrief
24 hours ago