A majority of voters in a new Hill-HarrisX poll support mandatory face masks in at least some public settings during the coronavirus panemic.

Forty percent of registered voters in the May 18-19 survey said wearing face masks should be required in both indoor and outdoor public spaces, while another 28 percent said facial coverings should be mandatory in public indoor spaces only.

Five percent of voters said they were uncertain on this issue. 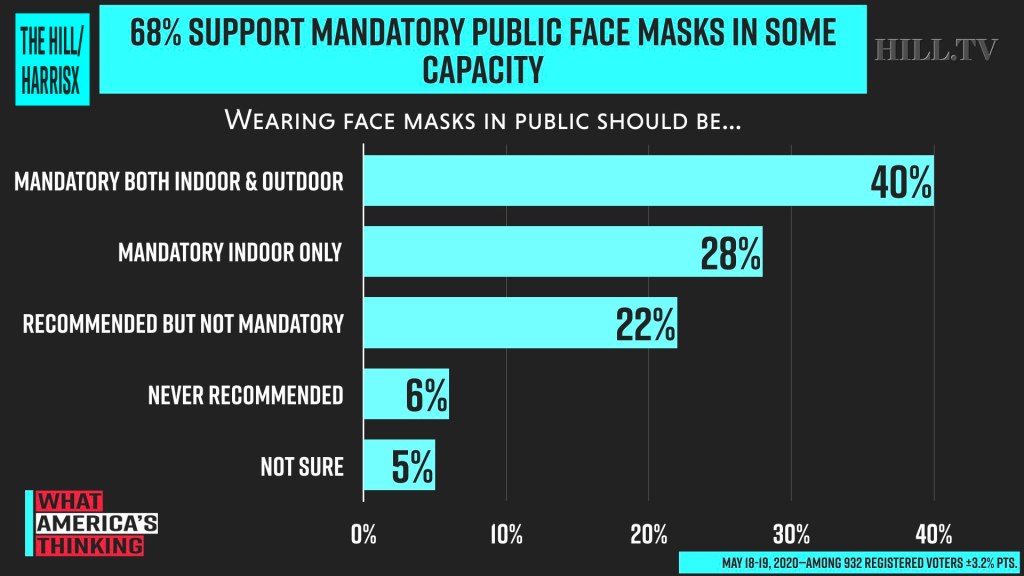 The poll found majority support across demographic groups for mandatory face masks in at least some public settings.

Fifty-two percent of Republican voters support mandatory face masks in some type of public spaces, with 27 percent saying both indoor and outdoor, and 25 percent saying indoor only.

Eighty-one percent of Democrats support mandatory face masks in some public capacity, including 52 percent for both indoor and outdoor spaces and 31 percent for indoors only.

Republican voters were more than twice as likely as Democrats to say wearing face masks in public should be recommended but not mandatory, at 31 percent and 13 percent, respectively.

“As we reopen, I think we’re going to start seeing questions of enforcement, for one, and also some issues of social pressure. Masks are perhaps the best example of that because they are one of the most visible signs of what people are doing or aren’t doing to keep themselves safe,” Mallory Newall, director of research at Ipsos, told Hill.TV.

“There is public opinion to back up some level of enforcement,” Newall added.

The Hill-HarrisX poll was conducted online among 932 registered voters. It has a margin of error of plus or minus 3.2 percentage points.