Voters view a corrupt political establishment as a bigger problem than both healthcare and gun violence, according to a new Hill-HarrisX poll.

Fifty-eight percent of registered voters in the May 18-19 survey said a corrupt political establishment is a big problem in the United States, while an addition 27 percent viewed the issue as a moderate problem. 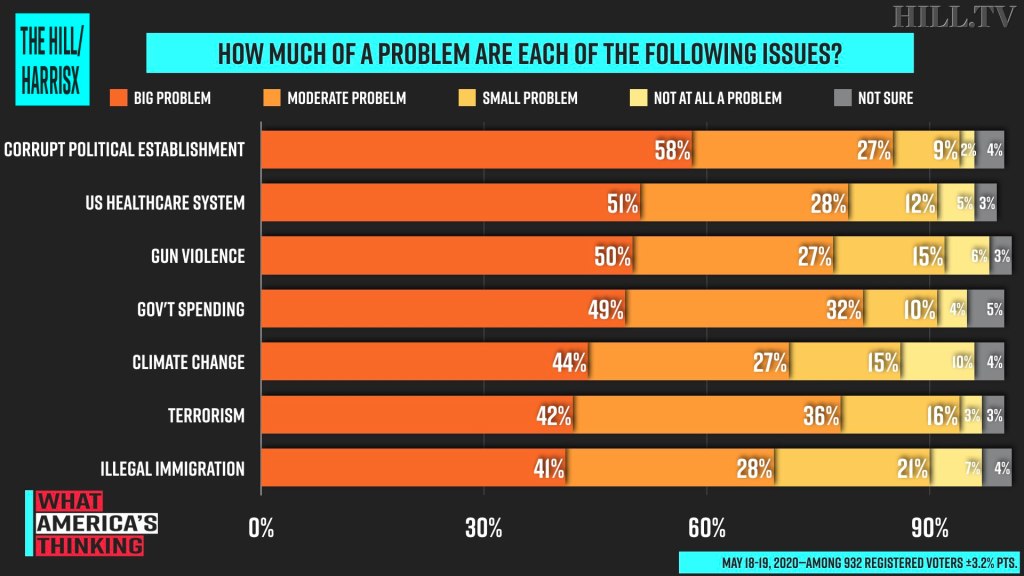 Roughly half of voters said the U.S. healthcare system was also a big problem, as well as gun violence and government spending.

On the issue of corruption, half of Republican voters said a corrupt political establishment is a big problem, along with 57 percent of independent voters and 67 percent of Democratic voters.

“This question comes at an interesting time because we’re facing an unprecedented pandemic and trying to deal with something like that during a time where we’re seeing historic low levels of trust,” Mallory Newall, director of research at Ipsos, told Hill.TV.

“I think it really underscores why we’re seeing some of the divides that are starting to emerge in our society,” Newall added.

The Hill-HarrisX poll was conducted online among 932 registered voters between May 18 and 19. It has a margin of error of plus or minus 3.2 percentage points.

12 hours ago
Rising
4 days ago