President Trump’s approval rating has dropped 6 points in the past month amid widespread unrest and economic uncertainty, according to a new Hill-HarrisX poll.

The survey of registered voters conducted this week found that 44 percent approve of the job Trump is doing compared to 56 percent who disapprove.

That marks the first time Trump’s approval has dipped below 50 percent since March and his lowest approval rating in the poll in a year, though it still remains in the mid-40 percent range.

The last time Trump’s approval fell to 44 percent was May 2019, while his lowest recorded approval rating in the Hill-HarrisX poll was 43 percent two months earlier. 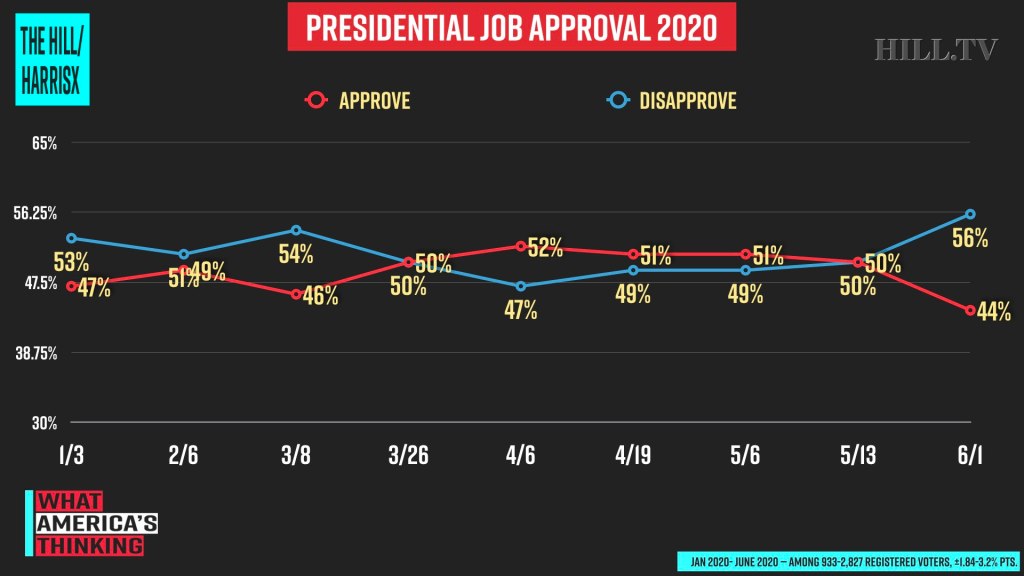 The latest survey, conducted between Monday and Thursday this week, comes amid continued protests in major cities across the country over the death of George Floyd, an unarmed black man who died last week in Minneapolis police custody.

While many protestors have gathered peacefully, demonstrations have also at times turned violent, with numerous clashes with police and instances of vandalism and looting rocking several cities and prompting a large law enforcement response.

A recent Reuters-Ipsos poll found more than 55 percent of Americans disapprove of the president’s handling of the protests, with 40 percent strongly disapproving.

And according to a new PBS-NPR-Marist poll, more than six in 10 Americans view the protests as legitimate and 67 percent of respondents say they think Trump has mostly increased tensions.

“What I think is happening again is that the President is running counter to public opinion,” Lee Miringoff, Director of the Marist poll, told Hill.TV.

Miringoff points to Trump’s hardline strategy towards the demonstrations. “People are not welcoming that approach from the White House,” he added.

The protests against police brutality erupted amid the backdrop of a months-long pandemic, which has resulted in more than 100,000 deaths in the U.S. and widespread economic loss.

After weeks of devastating economic news due to the coronavirus lockdowns, the Labor Department on Friday reported a drop in the unemployment number.

Republican pollster and partner at the Tarrance Group, B.J. Martino, said the economic news is a good sign for Trump.

“It’s going to help the President close the gap again from where that job approval shows up to those who approve of his performance on the economy,” Martino told Hill.TV.

Despite his overall approval dropping since last month, Trump continues to receive 58 percent support over his handling of the economy, according to the Hill-HarrisX poll.

The poll was conducted online among 2,827 registered voters between June 1-4. It has a margin of error of 1.84 percentage points.