Forty-seven percent of registered voters that responded to the June 1-4 poll said they’d vote for Biden if the general election were held today, a 5 percentage point increase from the May 2020 survey where the Biden received 41 percent support.

By contrast, 37 percent of respondents said they’d vote for Trump in the general election, a 4 percentage point decrease from the May survey. 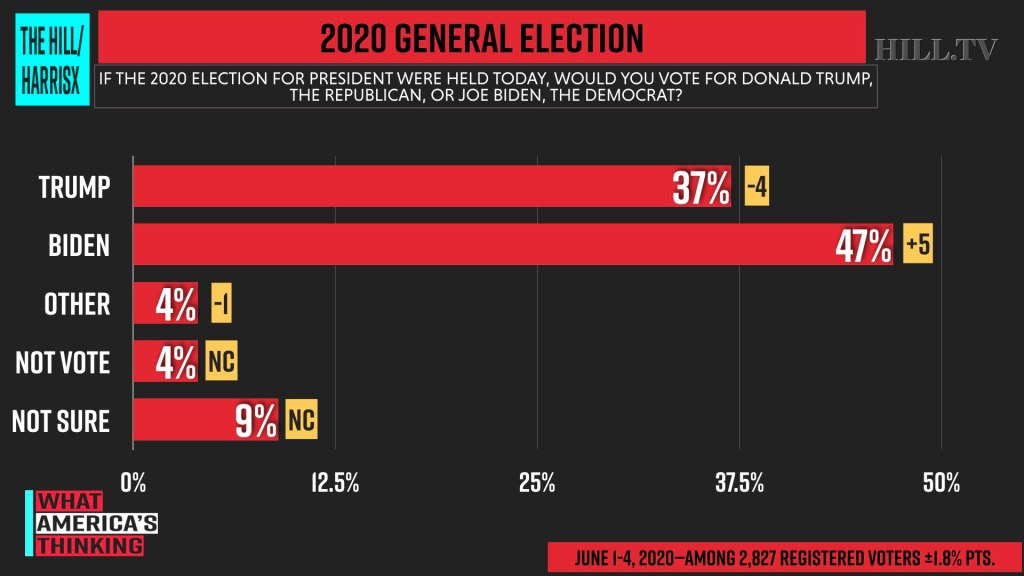 Four percent of voters said they would prefer someone else, a 1 percentage point decrease from last month.

Another four percent said they do not plan to cast their ballot in the 2020 presidential election and 9 percent of voters said they remain unsure of which candidate would receive their vote.

“Recently, in the past few weeks with the mishandling of COVID-19, with what seem to be missteps on where the country wants to be on protests and on issues of race, we have seen significant widening in this race,” Terrance Woodbury, Democratic pollster and founding partner at Hit Strategies, told Hill.TV.

However, Woodbury pointed to recent Trump approval numbers, where 24 percent of black voters said they approve of the job Trump is doing in the White House, as a warning sign to Biden’s chances in November.

“I’ll tell you right now, if he can get half of those 24 percent of people to vote for him, then he is reelected,” he added.

The Hill-HarrisX poll was conducted online among 2,827 registered voters between June 1-4. It has a margin of error of plus or minus 1.87 percentage points.

12 hours ago
Rising
2 days ago

2 days ago
Rising
4 days ago

4 days ago
Rising
6 days ago