President Trump’s job approval rose 3 points to 47 percent in the last week, according to a new Hill-HarrisX poll.

The June 8-10 survey was taken just after the May jobs report found surprise jobs gains as the country began to reopen following periods of nationwide lockdowns due to the coronavirus pandemic.

The poll found the president’s numbers recovered from dropping to 44 percent in the June 1-4 survey, which was taken as the country broke out into protests against police brutality,

However, according to the survey, Trump is still down from the 50 percent support he saw in May. 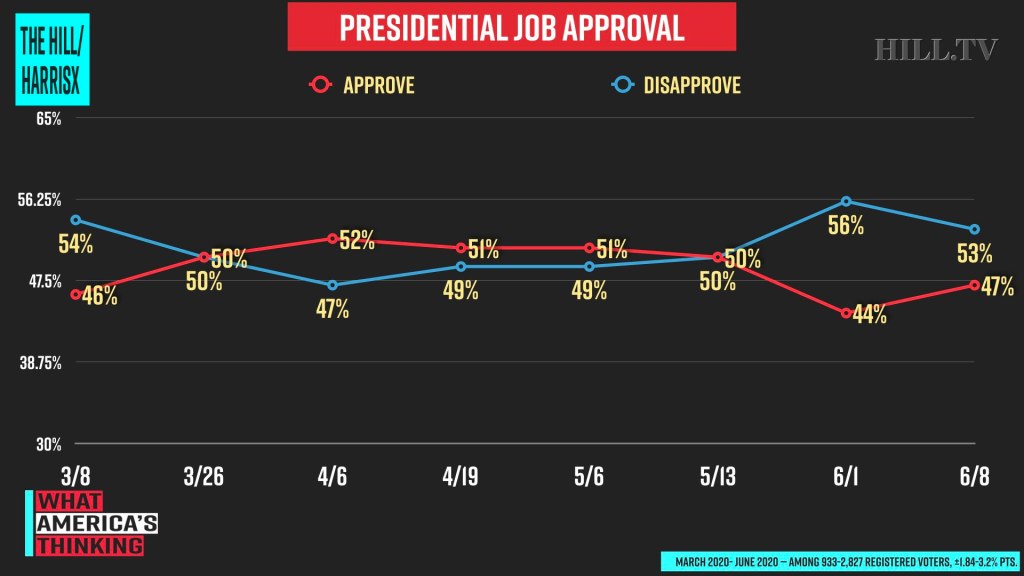 The poll found his approval among black voters fell from 24 percent in the June 1-4 survey to 21 percent in this latest poll.

Trump also lost overall support on the issue of handling the coronavirus pandemic, from 50 percent support in the May 13-14 survey to 47 percent in the most recent data.

He remains above water, however, when it comes to the economy and jobs.

Fifty-six percent of voters approve of his handling of the economy while receiving 54 percent support on stimulating jobs.

The Hill-HarrisX poll was conducted online among 1,912 registered voters between June 8 and 10. It has a margin of error of plus or minus 2.24 percentage points.