More than half of Democratic voters approve of cutting police funding as a means of reducing fatal encounters while 48 percent disapprove, according to a new Hill-HarrisX poll.

Fifty-two percent of Democratic voters approve of cutting police funding, according to the recent survey, while 78 percent of Republican voters and 70 percent of independent voters disapprove of the measure. 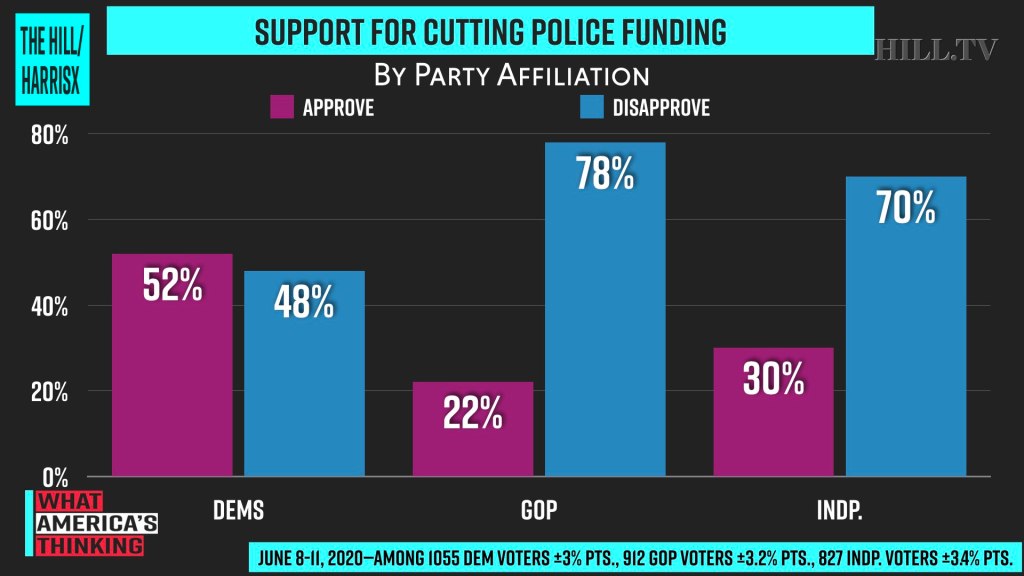 The poll found that majority of younger demographics —18- to 34-year-olds — and black voters supported the measure, at 54 percent and 60 percent, respectively.

However, cutting police funding was the least popular reform compared to other proposals, receiving 36 percent support among voters overall.

“There’s very few issues that garner support among over 8 in 10 voters in the country today. That threshold is met by proposals to reduce fatal encounters with the police: banning choke holds, identifying problematic officers, use of body cameras, and de-escalation training. These are policies voters are yearning for,” Dritan Nesho, chief researcher and CEO at HarrisX, told Hill.TV.

“What Americans do not support is cutting funding for the police, with two-thirds of voters opposing it. This is an issue that plays strongly with demographics that have been driving the recent protests and calls for change — younger voters, African Americans and Democrats — but do not curry support with a majority of voters,” he added.

Police reform measures, including calls to “defund the police,” have mounted in recent weeks following the death of George Floyd.

Congressional leaders from both political parties have criticized the proposal.

Tuesday, President Trump signed an executive order aimed at limiting the use of chokeholds.

The Hill-HarrisX poll was conducted online among 2,853 registered voters between June 8 and 11. It has a margin of error of plus or minus 1.84 percentage points.