A vast majority of voters support a vote-by-mail option for the 2020 presidential election, a new Hill-HarrisX poll finds.

Seventy-two percent of registered voters in the June 22-23 survey are in favor of mail-in ballots, while only 28 percent oppose the option. 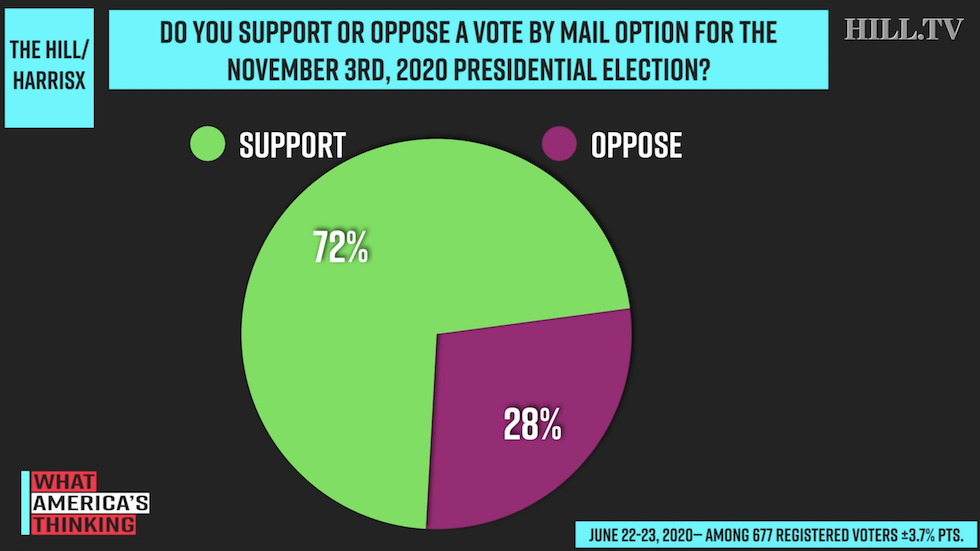 Fifty-two percent of Republicans said they support a vote-by-mail option, as do 87 percent of Democrats, and 73 percent of independent voters.

When it comes to who decides on whether or not to provide mail-in ballots, the survey found voters overall prefer state governments over the federal government, at 54 percent and 46 percent, respectively.

Republican voters were more in favor of the federal government making the decision, at 58 percent, while Democratic voters said they preferred the states to choose, at 65 percent.

Fifty-seven percent of independents said that the states should make the decision.

The survey comes as more states implement vote-by-mail measures in order to provide safer options during the coronavirus pandemic.

The poll found that voters are willing to participate in the electoral process whether or not the coronavirus is still around in November, at 86 percent.

The Hill-HarrisX poll was conducted online among 677 registered voters between June 22 and 23. It has a margin of error of plus or minus 3.77 percentage points.