U.S. voters are concerned about vote tampering and privacy when it comes to mail-in ballots, but are more worried about being exposed to the coronavirus while voting in person, a new Hill-HarrisX poll finds.

Sixty-eight percent of registered voters in the June 22-23 survey said they are either somewhat or very concerned about the possibility of tampering with mail-in ballots.

Republicans are much more likely to be worried about it, which is likely a reflection of President Trump’s rhetoric on the issue. Trump has repeatedly warned, without providing evidence, that mail-in balloting is subject to fraud.

Eighty percent of Republicans in the survey said they were somewhat or very concerned with tampering with mail-in ballots, compared to 68 percent of independents and 56 percent of Democratic voters.

Fifty-eight percent said they were worried about the privacy of their vote if they voted by mail, including 70 percent of Republicans, 53 percent of independents and 51 percent of Democrats.

But voters overall were more concerned about being exposed to the coronavirus when voting in person.

Fifty-five percent of voters said being exposed to the virus was a bigger concern, compared to 45 percent who said having their vote tampered with through mail-in voting was a greater concern. 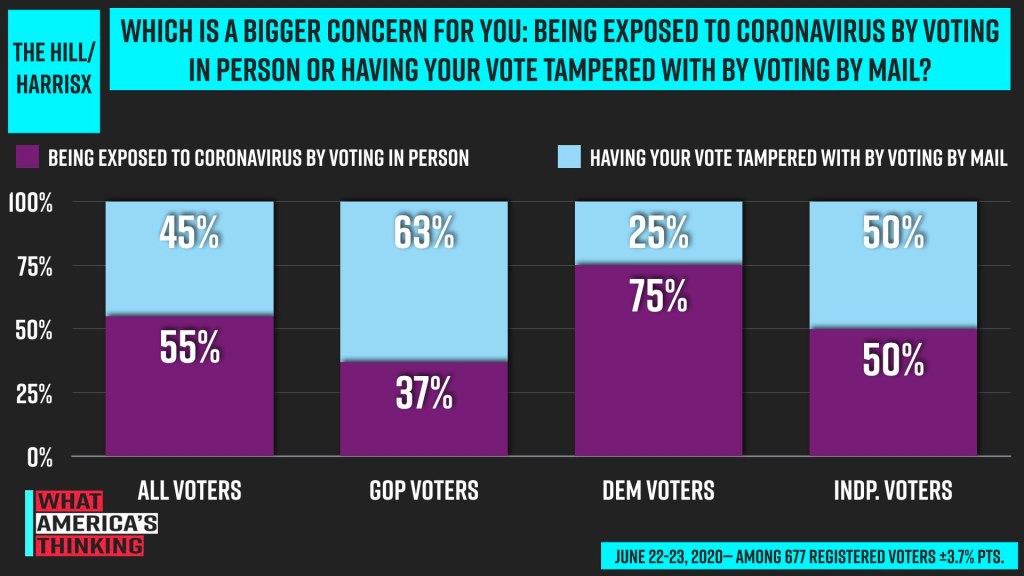 Sixty-three percent of Republican voters said they were more concerned with vote tampering than being exposed to the coronavirus.

By contrast, 75 percent of Democrats said exposure was the bigger concern over vote tampering.

The poll found that overall, registered voters believe voting by mail is very or somewhat safe, at 68 percent.

The Hill-HarrisX poll was conducted online among 677 registered voters between June 22 and 23. It has a margin of error of plus or minus 3.77 percentage points.