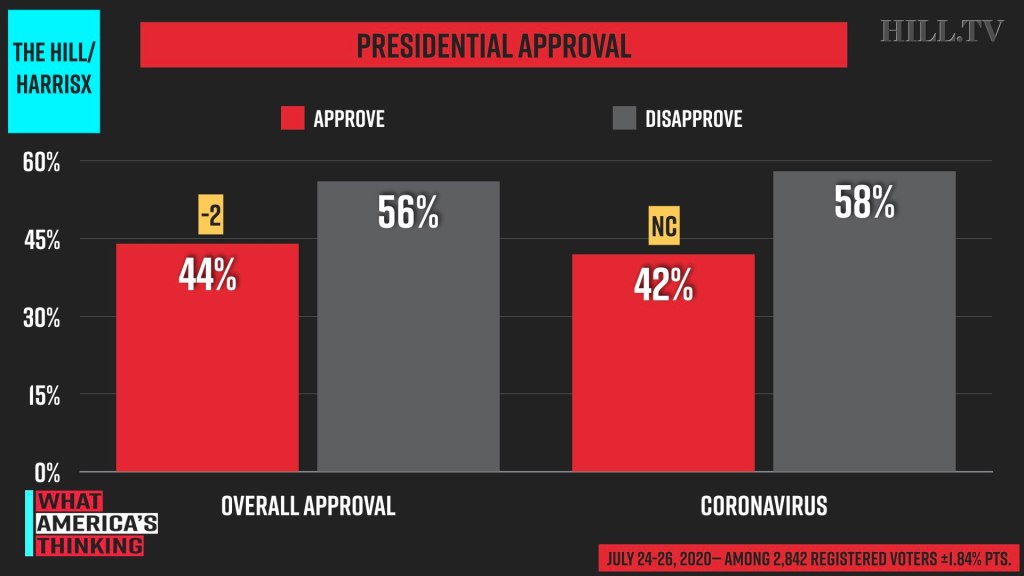 Forty-two percent of registered voters in the July 24-26 poll approve of Trump’s handling of the coronavirus pandemic, while 58 percent disapprove.

The poll found support among Republican and independent voters to be higher when it came to the president’s overall job approval compared to his handling of the coronavirus pandemic.

Eighty-one percent of Republican voters approve of Trump’s job in office, while 76 percent approve of his handling of COVID-19.

Forty-five percent of independent voters approve of Trump’s overall job in the White House while 39 percent approve of the his handling of the crisis.

Democratic voters reported low approval of Trump and his handling of the coronavirus, polling at 13 percent and 16 percent on those topics respectively.

According to Realclear Politics, Trump’s approval rating is 42.8 percent.

The survey comes as coronavirus cases and deaths have continued to surge throughout the U.S., with the country nearing 150,000 deaths as of Wednesday afternoon.

The poll also follows a press briefing on Tuesday, during which Trump openly questioned why the nation’s top infectious disease expert, Anthony Fauci, and other health officials received higher approval ratings than him. The president later concluded that it must be due to his personality.

The Hill-HarrisX poll was conducted online among 2,842 registered voters between July 24 and 26, with a margin of error of +/- 1.84 percentage points.