Sixty-eight percent of respondents in the Aug. 18-19 survey approved of the executive actions, while 32 percent disapproved. 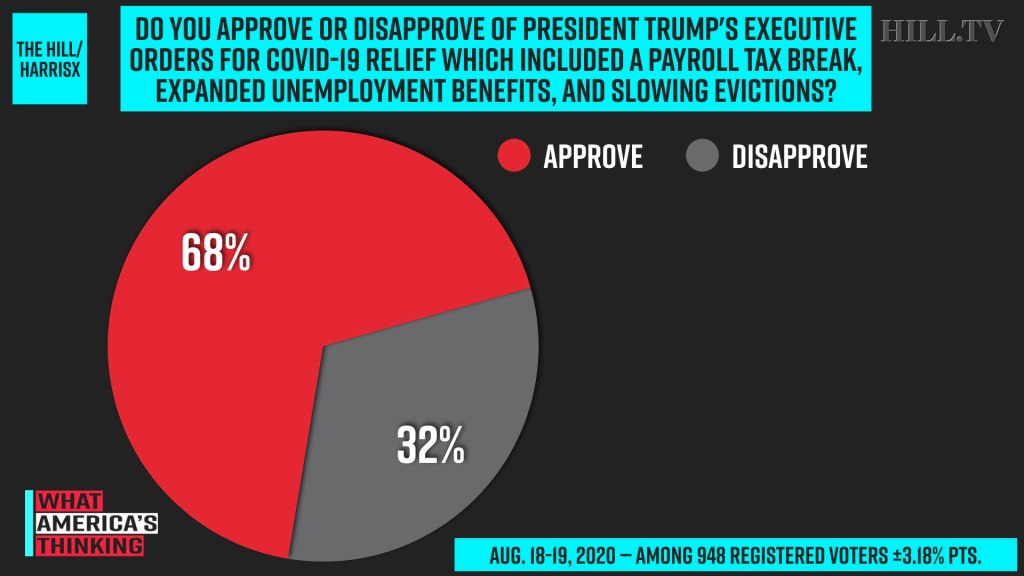 The moves by Trump garnered support from 90 percent of Republicans, 73 percent of independents and 45 percent of Democrats.

As a point of comparison, just 15 percent of Democrats approved of Trump’s job performance in a Hill-HarrisX survey conducted Aug. 8-11.

Trump’s executive orders circumvented Congress, where Democratic leaders and Trump administration officials are at an impasse on negotiations over another COVID-19 relief package. The orders have been called into question by legal experts who say Trump may not have the authority to enact those measures, while others have said they might not be as effective as legislation signed into law.

The latest poll comes as the Republican Party kicks off its four-day convention, which Trump will cap off with an acceptance speech from the White House.

Trump is looking to gain some momentum heading in the final 10 weeks of the campaign, where he trails Democratic presidential nominee Joe Biden by 7.6 percentage points nationally, according to the most recent RealClearPolitics average.

While a majority of voters in the new Hill-HarrisX survey approve of Trump’s executive orders on coronavirus relief, he remains underwater when it comes to his handling of the pandemic, with just 43 percent support in the Aug. 8-11 survey.

The new Hill-HarrisX poll was conducted online among 948 registered voters. It has a margin of error of plus or minus 3.18 percentage points.