A majority of voters in a new Hill-HarrisX poll say they view Democratic vice presidential candidate Kamala Harris as more moderate than Vice President Pence, though voters view both as prepared for the No. 2 role.

Fifty-five percent of registered voters in the poll released Tuesday said they think Harris is the more moderate candidate compared to 45 percent who said the same of Pence.

The survey found Harris with an 8-point lead over Pence as the candidate who is more trustworthy in the eyes of voters and who better aligns with their policy views. She also had a 10-point advantage on the question of likability.

Still, voters by a 55 percent to 45 percent margin said they view Pence as more experienced than Harris and respondents were evenly split on which candidate they think is ready to be president. 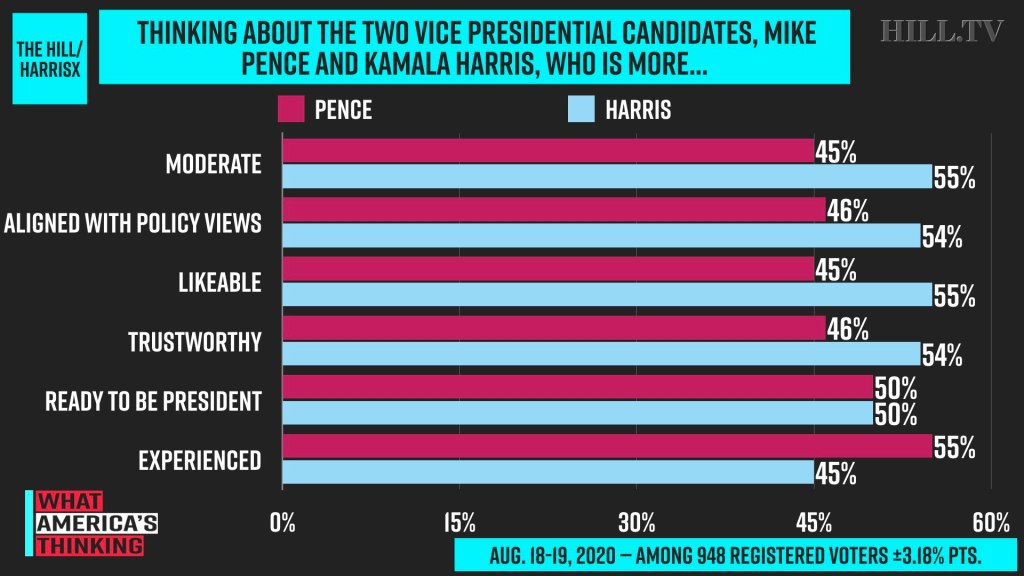 The survey comes as Republicans officially selected President Trump as their party’s nominee on the first night of the Republican National Convention Monday while tapping Pence to serve on the GOP ticket again as Trump’s No. 2.

The Hill-HarrisX poll was conducted online among 948 registered voters. It has a margin of error of plus or minus 3.18 percentage points.