Many Americans are buying into baseless theories around COVID-19, poll shows

A number of Americans have voiced a level of acceptance for baseless theories surrounding the COVID-19 pandemic, including the novel coronavirus’ origins and impact on mail-voting, a new Hill-HarrisX poll finds.

The poll found that while many Americans dismiss unproven or debunked theories that have emerged this year, others continue to believe them or have shown a level of acceptance for certain misinformation.

A majority of registered voters in the poll, 56 percent, said they at least somewhat believe the claim that “COVID-19 was created in a lab,” despite many scientists saying they think the virus developed naturally.

More than seven in 10 GOP voters, 73 percent, and a majority of Independents, 54 percent, were open to the claim. Among Democrats, 44 percent called the statement likely true while a majority said it was false. 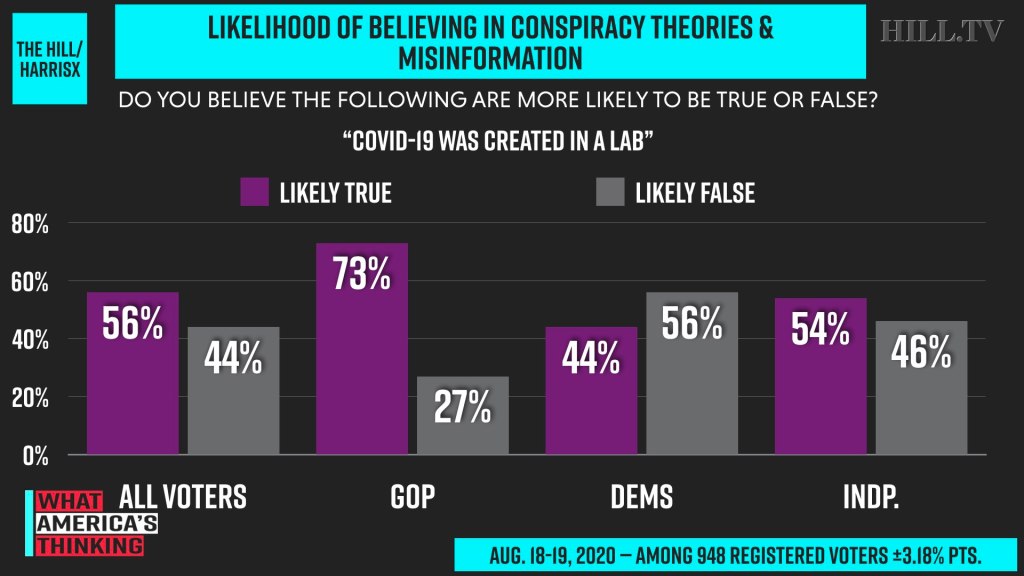 The survey conducted earlier this month also asked voters how likely they are to believe that “vaccines for COVID-19 will be used to implant tracking chips in Americans,” another baseless theory that has spread on social media this year.

More than a quarter of voters in the poll, 27 percent, said they thought the statement might be true, while 73 percent said it was likely false.

Other questions focused on conspiracy theories and misinformation surrounding the 2020 election.

Just over half of respondents, 51 percent, said they thought it was at least somewhat likely that “expanded voting by mail will be used to commit massive voter fraud,” a claim often floated by President Trump despite evidence. Forty-nine percent of voters said the claim was likely false.

A number of voters also showed a level of acceptance for the baseless conspiracy that “Kamala Harris is ineligible to be President.” Fully a third of voters showed openness to the false birther theory involving the Democratic vice presidential nominee, while 67 percent acknowledged it as false.

The poll found Republican voters to be more likely than Democratic voters to give stock to the theories and misinformation. For example, 30 percent of GOP voters said the false theory about Harris was “most likely true,” compared to 8 percent of Democrats and 11 percent of Independents.

The Hill-HarrisX poll of 948 registered voters was conducted online Aug. 18-19 and has an overall margin of error of plus or minus 3.18 percentage points.