Twenty-four percent of registered black voters in the Aug. 22-25 survey, which included the first two days of the convention, said they approve of the job Trump is doing as president, while 76 percent said they disapprove.

That is up 9 points from the previous survey conducted Aug. 8-11, where the President received 15 percent support among this group.

The survey found support among Hispanic voters also grew by 2 percentage points, from 30 percent in the last poll to 32 percent in this most recent survey.

Forty-four percent of overall registered voters in the Aug. 22-25 survey approved of Trump’s job as president, a 1 percentage point dip from the last poll. 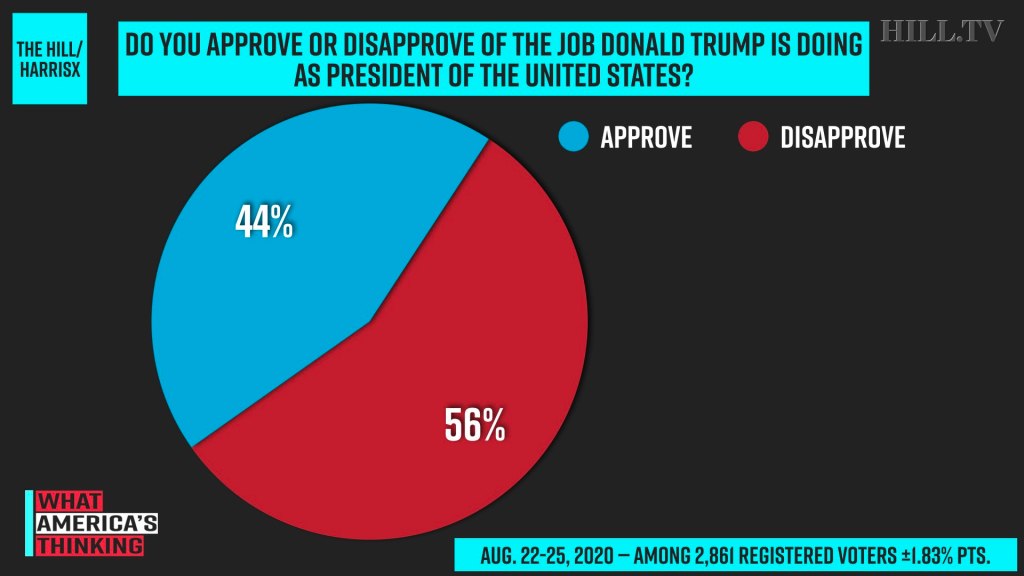 Eighty-two percent of Republican voters approve of Trump, a 1 point increase from the last poll, while 18 percent disapprove.

Eighty-seven percent of Democratic voters disapprove of Trump along with 64 percent of independent voters.

The survey found the president remains underwater with suburban voters and urban voters, at 42 percent support each.

His support remains steady among rural voters, at 53 percent.

Thursday, Trump officially accepted the 2020 Republican presidential nomination during the last night of the RNC.

The Hill-HarrisX poll was conducted online among 2,861 registered voters between Aug. 22-25. It has a margin of error of plus or minus 1.83 percentage points.

6 days ago
What America's Thinking
7 days ago