Democratic presidential nominee Joe Biden holds a 9 point lead over President Trump in a new poll that was taken during the Republican National Convention.

Forty-seven percent of registered voters in an Aug. 25-28 Hill-HarrisX survey said if the presidential election were held today they would vote for Biden while 38 percent said the same of Trump.

Most of the poll was taken during the Republican National Convention, which ended Thursday with Trump’s speech accepting the party’s nomination. 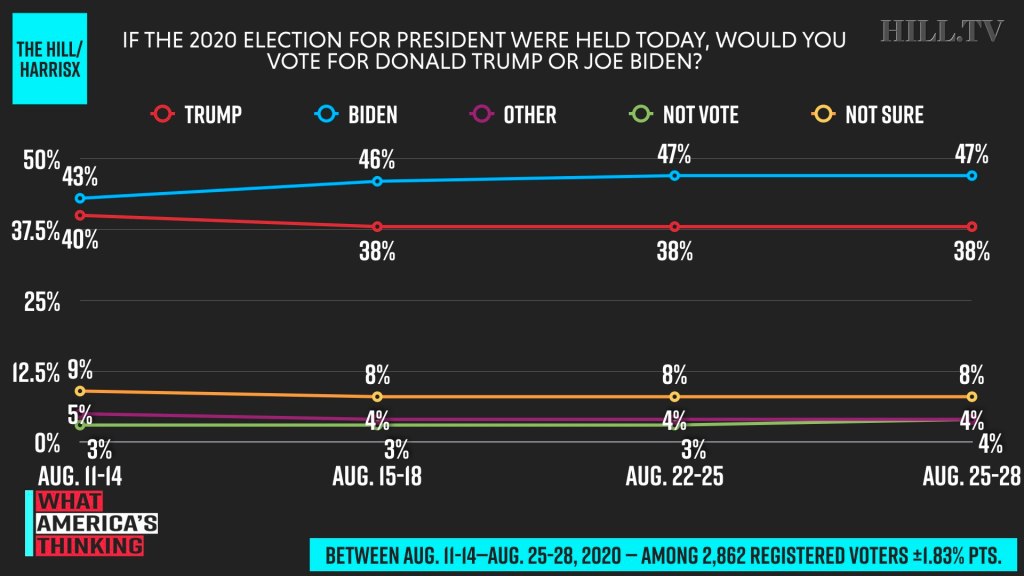 Biden currently holds a 6.9 lead in the RealClearPolitics average of national polls.

Part of the Hill-HarrisX survey was conducted on August 28, the day after the Republican National Convention ended.

A Morning Consult poll conducted on Aug. 28 showed Trump gaining on Biden following the Republican convention, with a 6 percentage point lead for Biden, down from 10 percentage points in a pre-convention survey.

Both presidential candidates targeted suburban voters during their party’s conventions.

The Hill-HarrisX survey found this group of voters currently favoring the former vice president over Trump, with 51 percent support, a 1 percentage point increase from the last poll.

By contrast, 35 percent of suburban voters said they would cast their ballots for Trump if the election were held today.

Eight percent of voters among this demographic said they are unsure.

The survey of 2,862 registered voters was conducted online and has a margin of error of plus or minus 1.83 percentage points.