Poll: Both Democrats and Republicans believe there is a possibility of rigged election

Voters on both sides of the aisle equally believe there is a possibility that the 2020 presidential election will be rigged, a new Hill-HarrisX poll finds.

Thirty-seven percent of Republican registered voters in the Sept. 21-22 survey said the 2020 election will probably be rigged, while 36 percent of Democratic voters said the same.

Independents were slightly more inclined to say the election will be rigged, at 40 percent.

Similarly, 38 percent of respondents overall said they believe the election would likely be manipulated, and 17 percent of voters said it will definitely be rigged. 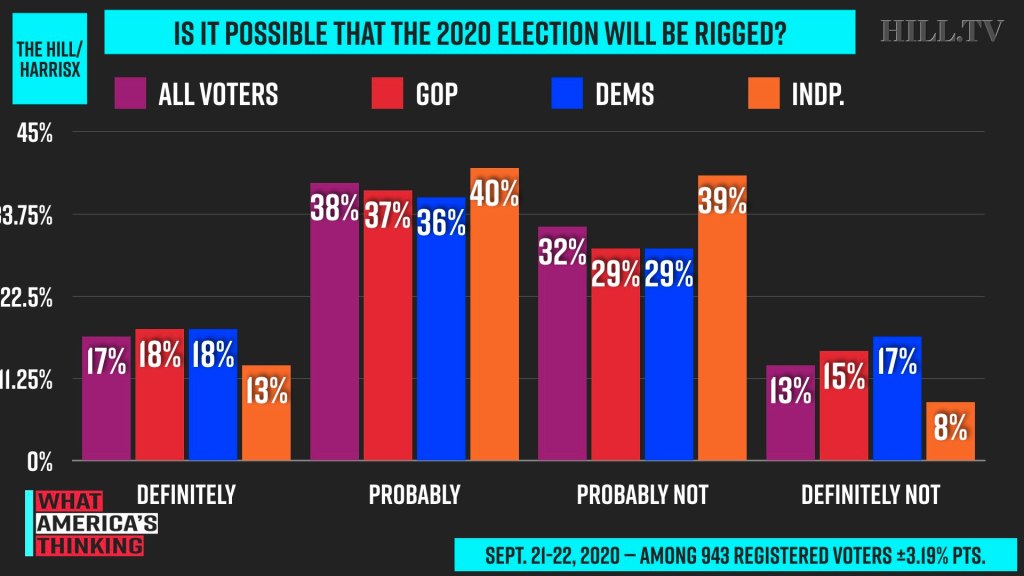 While both Democrats and Republicans may agree on the possibility of a rigged election, Mallory Newall, director of research at Ipsos, says the reasons behind that agreement vary.

“Republicans on the other hand, tend to be more concerned about voter fraud and how voting by mail can impact that,” she added.

The Hill-HarrisX poll was conducted online among 943 registered voters between Sept. 21 and 22. It has a margin of error of plus or minus 3.19 percentage points.

THE HILL TV
3 days ago

3 days ago
Rising
5 days ago