Democratic presidential nominee Joe Biden leads President Trump by 7 percentage points nationwide in a new Hill-HarrisX poll conduced after this week’s presidential debate but before Trump announced he had tested positive for the coronavirus early Friday.

Forty-seven percent of registered voters in the Sept. 30-Oct. 1 survey said they’d cast their ballots for Biden, a 2-point increase from the last poll conducted Sept. 19-21.

By contrast, 40 percent of respondents in the survey said they’d vote for Trump, no change from a few weeks ago.

Three percent of voters said they prefer someone else as their candidate for president and another 3 percent said they do not plan to vote. 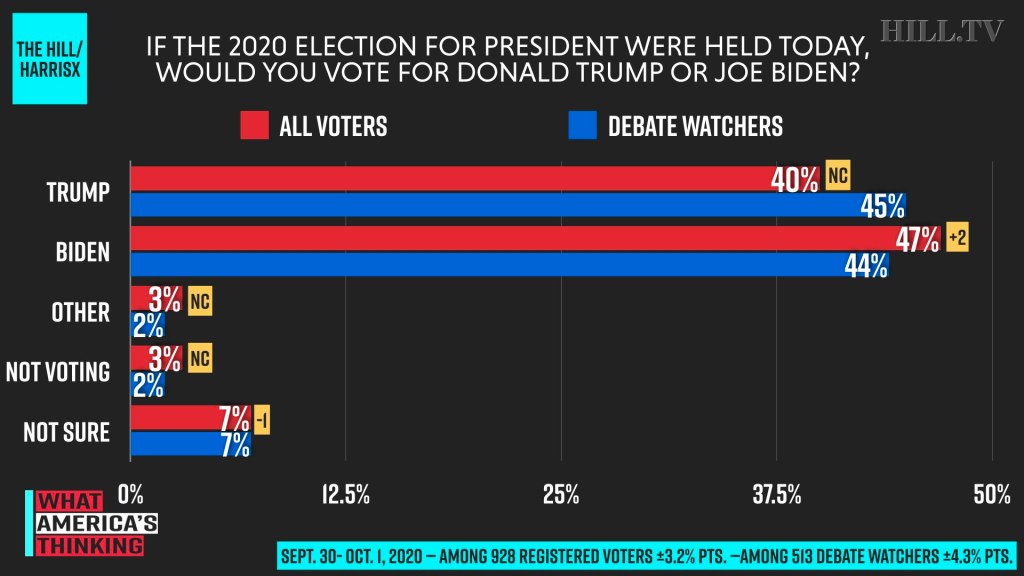 The survey also found 55 percent of respondents watched Tuesday’s presidential debate, with 61 percent of those saying they watched all of it.

Among those who watched the debate, 56 percent said that Biden performed better compared to 43 percent who said the same for Trump.

“While Biden emerges the winner from the first debate, the debate also does not appear to have changed voter attitudes, leaving the horserace untouched,” Dritan Nesho, lead pollster at HarrisX, told Hill TV.

“Voters clearly reacted to the chaotic style of the debate but the lack of substance did not shift votes, which is fundamentally a net win for Biden, the candidate in the lead,” he added.

The Hill-HarrisX poll was conducted online among 928 registered voters from Sept. 30 to Oct. 1. It has a margin of error of plus or minus 3.22 percentage points.